King Kong: Not So Fine 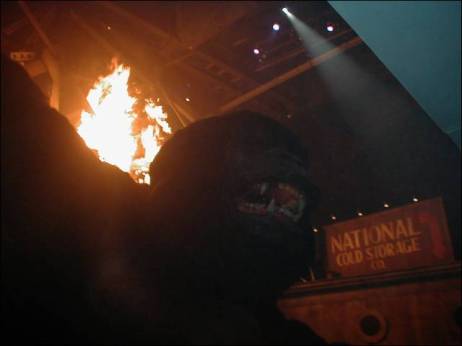 Another thing the dumb-ass media messed up/didn’t make very clear in their initial reports on the Universal Studios Hollywood fire: the King Kong “exhibit” that burnt to a crisp was actually the King Kong portion of the Studio Tour (read: the part with the big robot monkey).

I’ve never been to Universal Studios Hollywood, but it feels like I spent a good chunk of my early to mid twenties hanging out at Universal Orlando. I really love that park. One of my favorite attractions there was always Kongfrontation, the east coast adaptation of the simian tram attack that began wowing L.A. tourists in 1986.

Kongfrontation, which opened along with the whole Universal Orlando park in 1990, was truly an experience, from the authentically smelly 1970s New York subway queue area to the frighteningly large fireballs that popped up as Kong was attacking your Roosevelt Island cable care. The miniature cityscape that sat beneath the fuzzy ape’s non-existent butt (sorry, kids, he was just a torso) was also painstakingly detailed.

How do I know that? Universal does this thing every October called Halloween Horror Nights. Often, they change the rides up to give visitors a new, “spookier” experience. One year, they let us walk through the fake New York backdrop of Kongfrontation. I was really impressed with how real the quasi-neighborhoods seemed. I was also impressed with how close they let us get to the monkey. I could have easily ripped all his fur off.

My favorite part of Kongfrontation may have been the closed circuit TVs in the ride queue showing vintage late eighties/early nineties WWOR programming (Universal owned the station at the time of the park’s opening). All these shows I thought I’d never see again after moving from the Tri-State area—“Steampipe Alley,” “Out of This World,” “The Munsters Today”—were brought back to life and preserved forever as part of a theme park ride second only to Jaws in terms of fun and excitement.

Seriously, all this ride needed was a cot and a functioning toilet and I probably could have lived there.

All good things come to an end, though. In 2002, Universal shut down Kongfrontation with little to no explanation. Rumor around town was the building that housed Kong was about to collapse (much like their main competitor Disney, Universal Studios Orlando doesn’t have to adhere to standard Orange County building codes). Whatever the case, thousands of people (including me) were sad. I didn’t start cutting myself or anything, though, because I always knew there was another animatronic monkey out west I’d one day visit.

Now, that guy’s dead, and I’ve got no monkeys to look forward to.

Universal Hollywood says they do not plan to rebuild the Kong portion of the Studio tour, that they will instead replace the burnt out crater with something more contemporary. I cringe at what this could mean. A Big Mama’s House encounter? Some kind of “Deal or No Deal” attraction? In all seriousness, it’ll probably be some kind of Mummy yazz like what they replaced Orlando Kong with. Yeah, Egypt is neat, but I like ol’ Banana Breath way more.

Well, it was fun while it lasted. I’m gonna miss you, buddy. You saw America through some rough times. The stock market crash, the first Gulf War, “Homeboys in Outer Space.” That’s all over now. We’re better people, though, and we couldn’t have done it without you.

Here’s looking at you, chimp.

By the way, Universal, if you ever even think of permanently shutting down the Jaws ride, I will make it my business to completely destroy you.

P.S. – Michael Fay, the kid who got caned in Singapore for vandalism, worked on the Kongfrontation ride shortly after returning to the U.S. I got him as a ride operator once. He did a pretty good job, but everyone knew who he was and you could taste the contempt/pity for him in the air. I’m pretty sure I made some kind of snide comment as I exited the ride. He had the look of a slightly broken soul, but hey, he dug his own grave. Who the fuck is dumb enough to break the law in Singapore? Shithead.

P.P.S – No one had King Kong in the death pool.