The Quest For New Coke 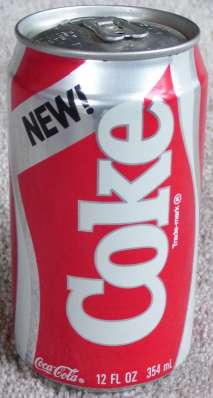 As some/all/none of you know, I’m currently working on a book about obscure, forgotten, and failed sodas throughout the history of the soft drink industry. I don’t know when I’ll be done or when it’s coming out or who will be publishing it, but yes, I’ll try to get you a free copy.

This week, the majority of my research is revolving around the current whereabouts of New Coke, a.k.a. Coke II, the infamous and hated beverage that replaced regular Coke for seventy-seven earth-shaking days in 1985. I haven’t seen a can of Coke II since before I had pubic hair, but I know it’s been lurking in the dark corners of U.S. retail for a long time now (a heard a rumor around the turn of the century that a convenience store on the edge of Chicago still regularly stocked bottles of New Coke on their dusty, out-of-the-way shelves).

Wikipedia, that almighty God of knowledge and information that’s ALWAYS RIGHT ALL THE TIME NO MATTER WHAT, claims the Coca-Cola Company ceased production of New Coke in 2002. However, the aforelinked Wiki passage also states that the despised drink maintains popularity and continues to sell in a couple of the darkest corners of U.S. retail—the Micronesian island of Yap and American Samoa. That means one of two things:

1. Wikipedia LIED and Coke did NOT cease production of New Coke in 2002 or

I’m more inclined to believe the former, although I wouldn’t immediately dismiss the latter. This is a multinational corporation we’re talking about here. No point in throwing out old product when a profit can be made somewhere!

I have no full-time job and I just sold my car, so I’d have no problem taking a quick vacation to one of these exotic Pacific Rim locales to investigate this matter. Did the fizz that nearly destroyed one of America’s most beloved institutions actually find a home on the other side of the world, and if so, how old is the Coke II these Micronesians and Samoans are drinking? Yes, it would be simpler to just e-mail Coke and ask them what the hell is up, but c’mon, they’re gonna lie. Remember, multinational corporation = pure, unadulterated evil.

So I looked into plane tickets to Yap—$2,476 round trip. Not completely outrageous, right? It’s a thirty-six hour trip, though, with a ten hour layover in Houston (yes, you read that right) and another two hour stop in Guam.

I think if those layover times were reversed, I might seriously consider booking the tickets right now. However, I vowed a long time ago never to spend more than nine hours and fifty-three minutes in Houston, and I can’t go back on my word just for Coke II. So going to Yap is out. I couldn’t find any flights to American Samoa, so that’s off the table, too. Bummer, but hey, what about contacting someone in Yap directly? I don’t know anyone over there, so I dialed up the website for Yap’s visitors bureau and fired off the following e-mail:

Greetings from Brooklyn, NY. My name is James and I have what you might consider a strange (albeit small) request. You see, I am an author currently working on a book about soft drinks in this country and across the globe. One of the beverages I focus on is New Coke, or Coke II, the infamous product Coca-Cola decided to replace original Coke with in 1985 to disastrous results. Coke II has not been available in this country for years; in conducting my research, however, I discovered that this failed soda is apparently still produced and popular on your soils.

I feel I cannot complete my book in good faith without having sampled Coke II (I was a mere child of six when it was first released and didn’t become aware of any “new” Coke until long after the fact). I currently do not have the funds to travel to Micronesia myself, so I ask you from the bottom of my heart—is there any way you or someone in your office could please go out, purchase a couple cans of Coke II, stick them in a box, and mail them to me here in the U.S.? I will of course reimburse your country for the soda and the postage. You will also receive a hearty thanks in my book when it is published (sometime next year, I imagine).

Please consider this request seriously. It is not a joke (even though it seems like one). If you can manage to complete this task for me, please mail the sodas to:

I thank you in advance and wish you and the citizens of Yap a great, peaceful week.

You’ll note I did not mention the Coke II they’re allegedly drinking may be over half a decade old. I don’t want to be responsible for a widespread panic in Micronesia. I also lied about not having enough money to get to their neck of the woods. I figured that was easier and less bizarre than saying, “I refuse to spend ten hours in Houston.”

I will let you know if I here anything back from the fine people of Yap. I have a bunch of government phone listings for American Samoa; I’ll probably call the President or one of his underlings in the next day or two to see if A.S. can hook me up.

If any of you out there reading this can direct me to a secret stash of Coke II somewhere in the continental forty-eight, holla atcha boy. So far, eBay has yielded nothing. Plenty of Crystal Pepsi, though.

14 responses to “The Quest For New Coke”