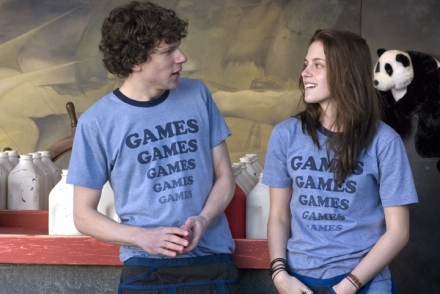 “OH MY GOD, I love Husker Du, too! We should totally fall in love!”

Hey, did you know that only cool, smart, rational people who are completely in touch with their emotions listen to the New York Dolls and the Replacements? Did you know only vapid, superficial idiots who have no regard for other people’s feelings listen to mainstream pop crap like Judas Priest and Falco? These are the not-so-subtle ideas at the heart of Adventureland, a pretty routine Fast Times retread that dials the yuks and nudity down to nil so they can drive home the point that Lou Reed fans are the only worthwhile lifeforms on our planet.

This movie was pushing the soundtrack before the goddamn production logos even came up. The ramshackle opening of “Bastards of Young” filled the theater right after the last preview, as if to say, “Bon Jovi fans, get the hell outta here right now.” Seconds later, we meet a fumbling Jesse Eisenberg, a Pennsylvania college grad with dreams of further matriculation at Columbia dancing in his head. Unfortunately, his folks have hit a rough financial patch. If this buttoned down aspiring Ivy Leaguer wants to get to NYC, he’s gonna hafta pay for it himself. Cue shitty amusement park job (featuring all the requisite weirdos – creepy bosses, fat Rush fan, pipe-smoking misanthrope, and hot damaged vampire chick).

Adventureland almost comes across like a biopic about P.J. O’Rourke or some other seasoned Rolling Stone contributor who exclusively wears khakis, smokes pot, and totally horns out for girls with nice vinyl collections. The whole crux of this movie—rich kid works at trashy theme park so he can afford grad school—could have been solved by two words: student loans. Sure, they follow you to the grave, but it’s gotta beat standing around in the hot sun all day for three months taking abuse from the best Monroeville has to offer.

Ah, but if Eisenberg doesn’t sign up at Adventureland, he won’t meet Twilight hottie Kristen Stewart, who he has to fall in love with so there’s something to stick between the shots of Bill Hader and his hilarious mustache. The kids try to keep it casual until other dalliances start to muck things up. There’s yelling and crying and confrontation; thankfully, a generic movie downpour comes along at just the right moment, providing the perfect clichè wherein the couple can sort the whole mess out.

Although I enjoyed the muted character approach and a few of the performances, there’s no getting around the fact Adventureland is just another by-the-numbers “cool people listen to cool music and fall in cool, intense love until uncool people who like uncool music get in the way and fuck everything up” motion picture. Hollywood, when will you stop slandering those who genuinely like “Rock Me Amadeus” and Foreigner? What did Falco ever do to you? Lou Reed never wrote anything I could dance to. Does that make me evil?

FINAL SCORE: One and a half vinyl copies of Tim (out of four).