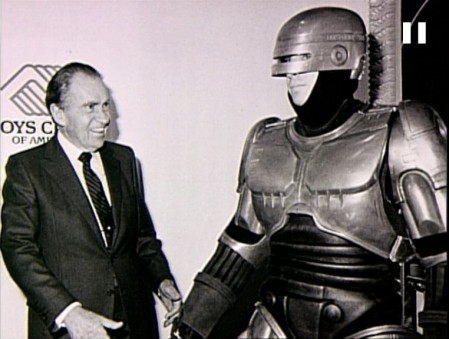 Okay, I don’t know the full story here, but according to various sources, disgraced former president Richard Nixon was hired in 1987 by the makers of Robocop to help promote the film’s home video release. Why, I have no idea. Was Gerald Ford not available? Out of all the former presidents, I think, Gerald Ford had the most in common with Robocop. Both of them talked like computers and made dumb jokes. Also, I’m pretty sure Gerald Ford accidentally blew up a gas station in Detroit once trying to apprehend a criminal (that happened the same day of the “M*A*S*H” finale, though, so it didn’t get much press).

But I digress. What Richard Nixon specifically did to help promote the arrival of Robocop on VHS / Laserdisc isn’t immediately clear. I’m guessing he went on “Meet The Press” or something and slipped in a few quotes from the movie during his interview? Maybe he went on a tour of video stores the week it came out, shaking hands and doing his awesome Robocop impression. I don’t know. I was eight at the time and not really paying much attention to promotional campaigns for hyper-violent Paul Verhoeven movies. Alas, the website for the Nixon Library in California offers surprisingly little concerning this chapter in RMN’s life (don’t worry—I’ve already sent them an e-mail).

What I can tell you is that Nixon donated the money he earned from pimping Robocop to the Boy’s & Girl’s Club of America; this clearly prompted the grateful organization to set up some kind of awkward promotional event wherein Tricky Dick was simultaneously thanked and introduced to an unknown jag-off in a Robocop costume. Thus, the picture resting above all this text. Again I will point out how friggin’ excited Nixon looks to finally be meeting Robocop in the flesh chrome.

“Oh my GOODNESS! You CAME! I didn’t think you’d be able to make it! Oh, wow. Will you sign my autograph book?”

I can see how Nixon may have been way into Robocop. Strong, unyielding central figure takes charge in dangerous environment, scares just as many people as he helps. That was the basic plot of Nixon’s favorite film of all-time, Patton. There was one thing Patton didn’t have, though—a guy getting melted by toxic waste and then torn apart by a speeding car. That part was sick, bro. Totally sick.

Note the violin perched next to the TV. I’d pay a thousand dollars to watch Robocop play the violin.

7 responses to “More On The Richard Nixon / Robocop Summit”