I can’t believe this isn’t getting more press. In an interview with the A.V. Club that ran last week, famed character actor and Michelle Pfeiffer diddler Fisher Stevens blamed Steve Guttenberg for the suckiness of Short Circuit, the 1986 talking robot movie that featured both actors. While reminiscing about his somewhat racially insensitive Circuit role as Ben Jabituya, Stevens was prompted with the rumor that the film’s script was far superior to the final product. Quoteth the Fish:

“Well, you cast Steve Guttenberg. And also, the voice they chose for that robot…You didn’t picture that when you read the script.”

DAMN, GINA! Earlier in the interview, Stevens touched upon the feelings of dread that overcame him when he learned Steve G. was attached to the project:

I originally was hired, and then they fired me because they decided to make the role Indian. Originally he wasn’t Indian. And then they hired Bronson Pinchot. Then they fired Bronson and hired me back. It was a very crazy scenario. I had an amazing time. Although, I remember I was like, ‘Steve Guttenberg?’ [Groans.] I was not excited to work with him. Ally Sheedy was a goddess, and I really wanted to work with Ally Sheedy, but Steve Guttenberg… And he turned out to be a really nice guy.”

Emphasis added. I like how he tacked that “nice guy” part on the end. Like that’s gonna make up for blaming an entire movie’s shittiness on one actor. You know, you were in the center of that storm too, Fish, pretending to be Indian and trading quips with a wise-cracking robot. Don’t act like you were trying to make The Killing Fields, Steve Guttenberg showed up, and everything turned into Naked Gun.

Now, let’s back up for a second and address the fact that, for one brief moment in time, Bronson Pinchot was to be a part of Short Circuit. How friggin’ zany did they want that movie? Anyone who saw Second Sight knows too much Pinchot can be lethal. I wonder what kind of accent Brons would have used to bring Ben Jabituya to life. You know it’s illegal for Bronson Pinchot to use his normal speaking voice when more than two cameras are present, right? It was written into the Constitution about a month before Reagan left office. Dammit, I still can’t believe that sassy bean dip motherFrito went to Yale (Bronson Pinchot, not Ronald Reagan).

But I digress. I’m not sure how I feel about Fisher’s remarks here. On the one hand, Steve Guttenberg has been pretty likeable in everything I’ve seen him in, Short Circuit included. There’s a reason his stock was so high in the mid-80s—sucker had charm. On the other hand, some films really hinge on their casting. Bob Hoskins did a great job in Who Framed Roger Rabbit, but don’t you think that movie would have been a smidge better had the producers landed one of their original choices, Bill Murray or Harrison Ford? C’mon, who does hard-boiled better than Harrison Ford? Who does talking-to-cartoons better than Bill Murray?

I can’t wait to see if Guttenberg fires back. Of course, he may be too busy trying to steal Michael Jackson’s kids.

Speaking of which, my friend John looks a lot like the other subject of this post, Fisher Stevens. Look at the photos below and try to tell them apart—I dare ya! 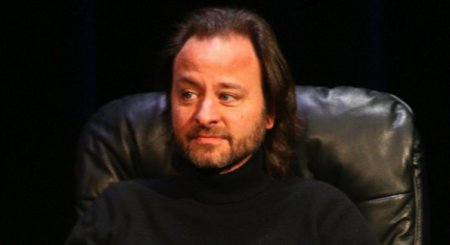 Give up? John’s the one with the glasses.