Here’s some food for thought: did Chuck Biscuits himself perpetrate the entire Great Chuck Biscuits Death Hoax of 2009, chuckling under his breath as he hosed me for six months and then laughing heartily as the world mourned his passing two weeks ago?

I have no idea, but that very notion was suggested to me by someone close to Chuck the Monday after the whole mess erupted. This particular person, someone who has known Chuck since long before he was in Danzig, told me that biscuitschuck@hotmail.com is in fact the drummer’s personal e-mail address, that the text of the messages I was sent match Chuck’s writing style, and that it was absolutely him in the picture I posted back in May. Their theory as to why Chuck would do something like this? They figured it was just his super crazy way of reinserting himself into the pop culture landscape.

While this was interesting and somewhat relieving to hear, I took it with a grain of salt. This person could be hoaxing me as well, I thought. So I decided to sit on this strange theory for a little while and see what developed.

It’s been over a week, and guess what? Nothing has happened. No hoaxers have come forward, no one has pointed me in the direction of other possible suspects, Chuck himself has not released any kind of statement – heck, Chuck hasn’t even e-mailed me to complain about my “lousy journalism”/ask where I was getting my info from/figure out who was impersonating him and his wife. If I were in his position, I’d really want to figure out who was using my identity and why they were sending pictures of me around and why they were pretending I was dying of throat cancer. If biscuitschuck@hotmail.com is Chuck’s address, if that picture is him and he didn’t do this, well, that’s pretty worrying RE: personal security.

It also strikes me as rather curious that the person who confirmed Chuck’s non-death to the world was, in the end, his estranged brother Bob and not himself or his wife, Lauren. The fact that I knew Lauren’s name, the fact that she was the person I was supposedly receiving updates on Chuck’s health (and the news of his eventual “death”) from, is what spurned Bob to drive several hours from his home in Canada to Seattle to investigate his brother’s alleged passing. Below is a copy of the e-mail Bob sent me regarding these facts:

Lauren, whose name I was protecting when this story broke because I knew it was the one true and legitimate piece of personal Chuck Biscuits info I had, only mailed me once about all this, from a different address than the one I had previously received messages from. All she asked was why I thought Chuck was dead. I explained my side of things to her and never heard back from her. Below, a copy of that correspondence:

Sure, other noted sources eventually piped up concerning Chuck’s undoubted alivedness, like his former band mates Joe Keithley (publicly) and Eerie Von (via e-mail to me), but doesn’t it seem kind of odd that Chuck’s wife would contact me and, rather than confirm that her husband is alive, ask me why I think he’s dead? This is the guy’s wife – surely she knows if he’s alive or dead. Unless, perhaps, she was in on the hoax?

Now, look – I’m not saying there’s a specific way for people to handle their own death hoax. I’m also not saying Chuck Biscuits and/or his wife definitely did this shit; the only source I have on that is off the record, my personal rock n’ roll Deep Throat, if you will. However, I am saying there’s a lot of stuff here that doesn’t quite add up, and I don’t think it’s completely outrageous to suggest Chuck Biscuits may have somehow been involved in this odd publicity stunt.

For the sake of posterity, below I’ve posted screen caps of three of the original e-mails I received from “Chuck”/”Lauren” before “he” faked his death and then reemerged (apologies for the blurriness and poor cropping; I failed Photoshop 101): 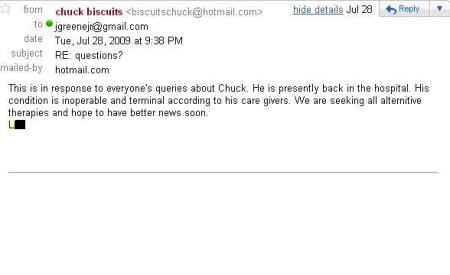 The “inquiries” mentioned in the second e-mail refer to a series of interview questions I had sent “Chuck.” Did Chuck Biscuits fake his death to avoid completing this interview? Let’s remember – this man collects cereal and retained the surname “Biscuits” when he joined Danzig.

Stay tuned for any further developments, folks. Thanks to everyone who has supported me during this utterly bizarre incident. To those who still think this is just another example of some uneducated blogger not getting his facts straight or some wanna-be Internet celebrity fabricating a story for blog hits, I really don’t know what to say. Jon Gosselin is way higher than Chuck Biscuits on Google Trends, and if you can figure out the current address/place of employment/cell phone provider/shoe size of another rogue 1980s rock drummer (say Joey Image or Arthur Googy), I will personally buy you dinner at Arby’s.