An Important Plea Directed At Hollywood

Unless you’ve been trapped under Louie Anderson for the past few years, you are most likely aware the movie industry in this country is currently waist-deep in another wave of 3-D, the headache-inducing view technology that shames you with dorky facial accessories. Apparently there have been some major breakthroughs since I first strapped on cheap paper glasses to watch John Wayne’s Hondo in the marvelous third dimension all those years ago on WPIX Channel 11. 3-D technology is now better than ever, they say, which is why studio bigwigs are tacking the shiz onto every major release they can think of.

Yes, my friends, it looks like 3-D might be here to stay this time. People are going so nuts over it they’re actually going back to old two dimensional movies and repurposing them for maximum screen-poppin’ action. While I welcome a new Star Wars prequel franchise where I can actually reach out and touch Hayden Christensen’s awful performance or a My Dinner With Andre where Wallace Shawn’s spittle seems to soak the top of my head, there’s actually just one film from my lifetime that I feel desperately warrants a transfer to the third dimension.

Just imagine how grand the illusion would be, to be magically find yourself IN Bill Murray’s apartment as he angrily plays basketball with himself and attempts to do five pushups. For the first time, you could actually taste the sarcasm dripping off every quip Harold Ramis delivers. Judge Reinhold’s pudgy, youthful face would be almost close enough to kiss (you know you’d try, don’t even front). Plus, Sean Young and P.J. Soles in 3-D? Homina homina homina HOW WOW!

I suppose the true selling point would be the film’s ending, wherein Murray and Ramis invade what is now the Czech Republic in order to save their hapless platoon. There’s explosions, there’s gunfire, there’s gratuitous Joe Flaherty. Who doesn’t want to see all those elements flying out at dangerous speeds towards their general ocular area? Communists, that’s who. Communists and mental patients.

Come on, Hollywood. Don’t let us down. Give us Stripes in 3-D. I want to see Sergeant Hulka fall off that training tower right into my lap. Make the dream a reality instead of shoveling all this animated crap up in our noses. 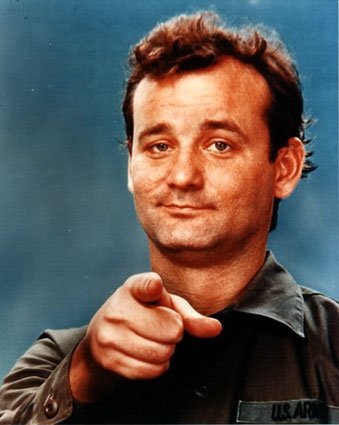 You see Bill Murray there? He’s pointing at you, powerful studio bosses. He want you…to do the right thing.

Stripes in 3-D. The time is now. Let’s make this the most significant event of 2010.