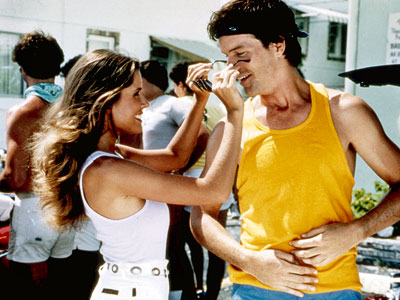 You just did a keg stand on my heart.

You look at a movie like Spring Break and on the surface you think the message is “beer” or “tits” or “beer-soaked tits,” but I’m being completely honest when I say the feather in Sean S. Cunningham’s cinematic cap really pushes friendship and acceptance over all the tantalizing attention-grabbers.

Here’s a story of four dudes who, through awful motel management, end up booked in the same dingy room for a week. These parties could not be more diametrically opposed—two of these guys are Ivy League nerds, and the other two are shirtless, banana hammock rockin’ party animals. The opening scenes when they realize the error that has placed them together are rather tense. Will the nerds be pummeled into submission? Will these shirtless interlopers ruin the Ft. Lauderdale experience for our brainier friends?

In a pleasant surprise, the answer to both these questions is no. The cooler dudes, O.T. and Stu, are not the heartless beasts we assume all mega-tanned frat boys to be. The studs, perhaps seeing a younger version of themselves in their newfound roommates, take the dorks—Nelson and Adam—under their sweat-soaked wings. In turn, Nelson and Adam begin to look up to O.T. and Stu, the seasoned Spring Breakers who can teach them much about scoring with chicks and belly-flopping into pools from the tops of palm trees. The quartet become an inseparable gang, teaming up for beer pong and wet t-shirt contests and even crowding around the same toilet in a slightly awkward foursome when nature comes a’ calling.

Indeed, despite our exterior differences, we all pee yellow. There’s no reason we all can’t get along, which really should have been the message of the following year’s divisive Revenge of the Nerds and every rip-off that came in its wake. ROTN really widened the chasm between nerds and jocks, and for what? A few yuks? A handful of shitty sequels? In retrospect, the idea that you have to be one or the other is a little too George W. Bush for my tastes. I’d much rather live in the world of Spring Break, where the guy next to me might not be into Star Wars or cosplay, but at least I know he’s got my back if some leather-jacketed hooligan starts messing with me at the tiki bar.

Yet Spring Break pushes beyond that, going so far as to reverse the rock star / groupie gender roles. Midway into the film, O.T. (played with comic perfection by Steve Bassett) falls head over heels in love with the sexy singer of all-girl rock group Hot Date. By the look on his slack-jawed face, you know that she could treat him like garbage and he wouldn’t even blink. This is a pretty refreshing angle. Alas, there’s barely any time for Hot Date’s singer to toy with O.T.’s affection, as a larger chunk of Spring Break is devoted to Adam’s politician father and his greedy attempt to shut down the motel where all the action is taking place.

In that respect, Spring Break is pretty generic. Stuffy old fogey trying to ruin all the young people and their fun. I’m sure Doris Roberts would take some issue with that, but really, what else are you going to pit these carefree kids against? Killer bees? Time-traveling vampires? Oh man, that’s actually a good idea. Bram Stoker’s Spring Break. Count Dracula roaming the beaches of Panama City in a drunken haze, searching for blood and his driver’s license so he can get more Michelob. I’m gonna get started on a spec script.

Despite an evident lack of vampires, Spring Break delivers, offering up more heart and honesty than any film on Corey Feldman’s post-Gremlins résumé. It’s always nice when there’s at least a little substance behind all the firm, supple, and occasionally naked gazongas getting splashed with Miller High Life on streets of Ft. Lauderdale’s pastel utopia.