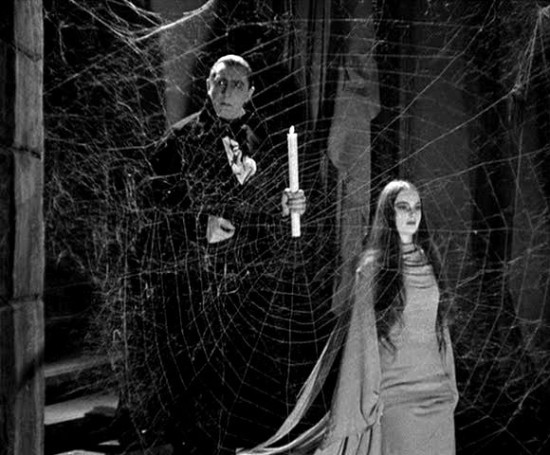 Hollywood was pretty much done with Tod Browning after the director’s unflinching 1932 circus drama Freaks proved a commercial and critical failure, but the horror master got one more chance a couple years later when ever-forgiving MGM let Tod remake his silent 1927 hit London After Midnight as a talkie starring Lionel Barrymore and Bela Lugosi. Unfortunately, the taint of Freaks could not be completely washed away, and the studio ended up hacking Mark of the Vampire (originally titled Vampires of Prague) into a plodding, tepid mess.

Mark begins typically enough: out-of-towners in some European village are warned of blood suckers and they don’t buy a word of it until they get attacked. The authorities investigate and squabble with the old world myth expert who knows these creatures are real. Meanwhile, Bela Lugosi creeps silently around his castle as Count Mora with his catatonic daughter in tow, stopping occasionally to look down at roaches and sometimes meandering outside to spook passersby. Aside from the capes and epic makeup, the pair don’t seem all that threatening. Still, no one really wants to invite them over for an intimate evening of Monopoly just in case they actually are evil Nosferatus from hundreds of years ago.

Mark of the Vampire has a twist ending that’s kept it from being considered a true horror film in many nerd circles, but the film’s real crime is an inability to build honest suspense due to snail pacing and too many attempts at comic relief. Surely Browning’s original vision (which revolved around a heavy, too-hot-for-1935 dose of incest) would have made Mark of the Vampire a more engaging exercise. As it stands, it’s no better than any of the other vamp outings that came in the wake of Browning’s most crushing success—1931’s Dracula. Both director and star (Lugosi) were at the top of their melodramatic game that year. Here, the famous pair are stumbling, neutered, tired, and possibly wishing they had remade something else.

The last known print of London After Midnight was destroyed in an MGM vault fire in 1967, and until someone’s grandkids dig up a previously unknown copy in some musty corner of a Nebraska basement, humanity is stuck with its pale talkie imitator. At least Carroll Borland (who plays Count Mora’s daughter, Luna) is interesting to look at in Mark of the Vampire. Funny story about Carroll—she was a Lugosi super fan who sent Bela some novel she wrote about the undead. Strangely touched by this gesture, Bela had her cast in a stage revival of Dracula and later this movie. That kind of thing would never happen today. I know, because I sent Tim Allen that “Home Improvement” fan fiction I wrote YEARS ago, and I haven’t received call one from that guy.

FINAL SCORE: One wild-eyed Carroll Borlands (out of four).