Rumors Of Crawdaddy’s Death Have Not Been Exaggerated 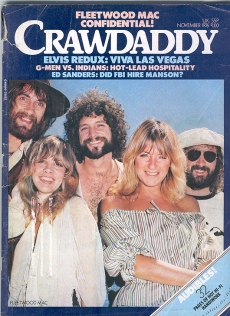 This is one of those things that makes my head throb, my chest sting, and my testicles ache. Crawdaddy.com, the Internet extension of legendary rock rag Crawdaddy!, is ceasing publication on July 22. The controlling bean counters have long been displeased with C-Dad’s relatively low traffic, but instead of investing a little time, energy, and moolah to improve the situation, they just went out and bought an already proven Internet winner. Hence, the return of indie music chronicle Paste Magazine, which Crawdaddy.com will be folded into.

I’ve been contributing to Crawdaddy.com since around the time it launched in 2007. It was enormously exciting to be included in a new chapter of this storied magazine’s saga. After all, Crawdaddy! was America’s first journal of rock n’ roll criticism, a volume whose silly name belied the groundbreaking and forward-thinking writing its pages contained. William S. Burroughs and John Lennon, C! contributors from way back when, generally didn’t lend their names to crap. I can’t tell you how thrilled I felt being Geordi La Forge to their Mr. Spock and Bones McCoy, as it were (Crawdaddy! founder Paul Williams would of course be Captain James Tiberius Kirk in this goofball metaphor that doesn’t even really make sense considering the mag first returned after its initial 1979 fold in 1993; guess that makes me Quark, or maybe Seven of Nine?).

It’s not for me to say if Crawdaddy.com matched the Crawdaddy! of yesteryear, but I can say firmly and proudly that between 2007 and now we produced a mountain of engaging, thought-provoking, and emotionally charged content. I am honored to have shared space with such great scribes including but not limited to Andres Jauregui, Dan Weiss, Denise Sullivan, Howard Wyman, Allie Conti, Mark Prindle, Ryan Wasoba, and Jocelyn Hoppa. Jocelyn was actually Crawdaddy.com’s Editor-in-Chief when I joined up; she did a great job running things and I’ll be forever grateful to her for giving me a shot at a time when I had more parking tickets than published clips.

At some point back there, Jocelyn stepped down and Reviews Editor Angie Zimmerman took over as EIC. The transition was seamless, and for once I could say I had a job where the new boss was just as awesome as the old boss. How often does that happen? Approximately never.

The best part about writing for Crawdaddy.com was the freedom. Our work was only edited for grammar, spelling, and factual information. We could write anything about anything, so long as it pertained in some way to rock / pop music, and I don’t mind telling you we were paid in the neighborhood of handsomely. That was, to steal a phrase from J. Springfield, an embiggening feeling. I’ve worked for other places that pay significantly less yet watch their content like the most conservative of hawks, desperate to adhere to a certain established mold. How sharply frustrating it is to hear from an editor that you can’t write x opinion piece because it might upset the corporate dictators, or to see a colorful phrase excised from your work because some stuffed shirt deemed it “uncouth.” Dried up stinky dog shit like that never happened at Crawdaddy. In the end, you were the judge, jury, and executioner of your own work.

I think anyone who spent more than a few minutes perusing Crawdaddy.com, whether they liked it or not, could ascertain that we were doing something unique. It wasn’t a catalog of list-based journalism or trend-riding link bait. Obviously part of the blame here lies with The Social Network, a movie that convinced a lot of old white men that websites are only worth a damn if they can get you blown in a men’s room.

But I kid Aaron Sorkin. It’s not his fault Papa left us for someone younger with bigger tits SEO. I guess that’s just business as usual. It’s still heartbreaking, though, because Crawdaddy! has such a rich history and recently it felt like the website was really growing and reaching more faces awash in LED glow. Now everything we did over the past four years is going to be relegated to a dusty wing of an already too-cluttered web presence. It feels like the end of Raiders, but the inevitable sequel isn’t so inevitable.

I’ll be blogging like regular over at Crawdaddy.com for the next two weeks, so keep tuning in for the requisite updates about Glenn Danzig, Axl Rose, and archaic ’90s rap groups. The motivation is faltering, but I know many of you out there are fans and appreciate the C-Dad, and that keeps me from spending my days face down in the bathtub marinating in a small pool of warm Sprite and my own filth. Thank you sincerely for your support.