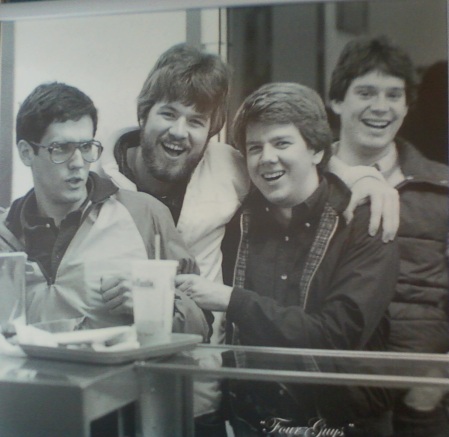 Because I’m cheap and have no palette, sometimes I dine at White Castle. I went there today and couldn’t help but notice, as I sat there punishing my gastrointestinal tract, the above photo hanging in the dining room near one section of seating. Roughly the size of twelve Mona Lisas (or three, or one—I don’t know, I’ve never actually seen the Mona Lisa), this photo is titled “Four Guys” and was apparently taken in Columbus, Ohio, in 1981.

I suppose the whole point is that we’re not supposed to know specifically who these four guys are—they’re just regular ol’ folk like you and me who shared some laughs and some stomach cramps at a Midwestern White Castle location at the dawn of the Reagan Eighties.

Still, my curiosity could not be abated. Who were were strange figures, currently reigning as the two dimensional Mount Rushmore of my neighborhood’s least health-conscious food establishment? Are any of them still alive? Does this photo really represent a candid moment in time, or was it meticulously posed in a secluded studio somewhere far from Columbus, Ohio? What’s the guy with the glasses saying that’s cracking up his buddies so hard? Is he doing an impression of Jim from “Taxi?”

When I got home, I Googled “Four Guys White Castle Ohio 1981” and received endless pages of unrelated Yelp.com White Castle reviews (“No chipotle mayo! I’m never going back!”). Guess I’ll just have to fire off an e-mail to WC’s corporate overlords. Hopefully they can provide the concrete explanation I seek regarding the Four Guys.

It goes without saying that if one of the Four Guys is reading this he should immediately contact me and explain the circumstances surrounding what I have just decided is a legendary depiction of white lower middle class America. I must know if my hunch is correct that the guy second from right went by the nickname “Baby Bear” and had an impressive model plane collection.

Error: Twitter did not respond. Please wait a few minutes and refresh this page.