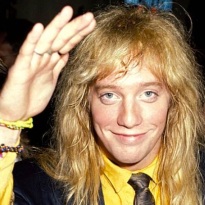 Jani Lane, the heavy metal singer who shot to fame in the early ’90s with Warrant and then spent what seemed like three lifetimes trying to escape the shadow of the band’s biggest hit, “Cherry Pie”, was found dead yesterday at a Comfort Inn in Woodland Hills, California. He was 47.

A cause of death has yet to be released, but Lane’s substance abuse problems were fairly legendary. Countless career relaunches were over before they started for Jani due to his inability to stay clean. Not that I’m damning the guy—he struggled with some serious issues, not the least of which being his band’s overnight 1990 success via a throwaway hit he was pressured into whipping up at the eleventh hour.

“I could shoot myself in the fucking head for writing [‘Cherry Pie’],” Lane famously groused to VH-1. Although he would later recant this statement, the decade or so Jani spent avoiding Warrant reunions at all costs suggested that there was more than a little truth to his maddening frustation with being known as “the ‘Cherry Pie’ Guy.”

And why shouldn’t that have bothered him? Jani Lane had a sharp ear for melody, and he crafted some of hair metal’s most neglected gems. Case in point: “Uncle Tom’s Cabin,” the song the Cherry Pie album was originally centered around, a swampy shit-kicker that’s worth more than Poison’s entire catalog. Also, consider “I Saw Red.” How is this song not a soft rock radio staple? With a little rearrangement, “Red” could have been a hit for Billy Joel in the 1970s.

Lane, who was born with the auspicious name John Kennedy Oswald in Akron, Ohio, is survived by a wife and four children. My condolences to them and anyone else who was positively affected by this man’s life/art.