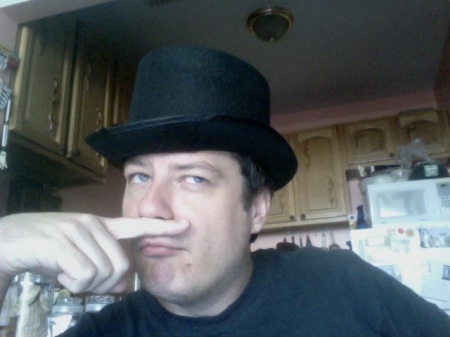 This top hat has been sitting on my kitchen table for weeks now. My roommates have offered no explanation so far as to where the hat came from or where it’s supposed to be going. I guess I don’t really care, unless it fell out of an intergalactic wormhole that spontaneously ripped open in the bathroom and must somehow be delivered to Joe Biden before the third Sunday in October. It’s here now, so I put it on sometimes and pretend I’m auditioning for the next Sherlock Holmes movie. The game’s afoot, bitch!

Does anyone else feel like Jim Carrey’s insistance on using the Internet like a normal human being is slowly murdering what’s left of his career? If I see him Tweet one more emoticon like this >;^} I’m going to smash my copy of The Truman Show out in the street. I don’t even care that Laura Linney autographed it for me. I’ll beat that VHS tape like a rented mule.

Real talk: I would never beat a mule, rented, leased, or owned outright.