Get Ready For The Danzig Chicken Sandwich Meme 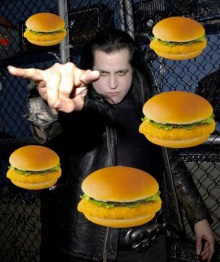 More rigamarole involving Uncle Glenn: Danzig’s Legacy set was abbreviated Friday night at Austin’s Fun Fun Fun Fest after our stocky hero stalled getting on stage for an hour, arguing with organizers about the temperature of the outdoor venue. Glenn apparently rolled into town dog sick and from the get-go demanded his set be moved indoors, or canceled. He also demanded, they say, French onion soup, vitamins, and a chicken sandwich from Wendy’s.

Even if the lengthy play-by-play from the festival’s booker that’s been popping up in reports is 100% inaccurate, even if this is all part of some larger conspiracy to discredit Glenn Danzig not only as a professional but as a demon incarnate originally born upon the scorching plains of Hades, the damage has been done. Danzig’s been linked to yet another name brand consumer item. The Internet will soon be rife with Photoshopped images of Mr. Dirty Black Summer chowing down on a clutch fast food sandwich. Perhaps Glenn’s face will be seamlessly affixed atop the shoulders of Wendy herself, his brooding visage peaking out from under those frighteningly red pigtails.

Allow me to reiterate something I’ve said several times before in both print and casual conversation—the only way Danzig can counter the mockery that arises from fans discovering his more human tendencies is by killing someone. That would shut all the jokers up real quick. No one ragged on O.J. for those stupid Naked Gun movies after June of ’94, is all I’m sayin’.

PREVIOUSLY: Danzig Legacy Chicago goes off without a hitch; All singer teases Danzig but quickly apologizes.