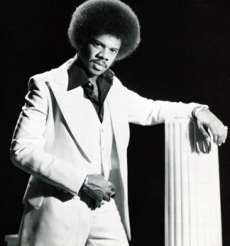 Jimmy Castor, the boisterous funk singer who authored some of the genre’s best tongue-in-cheek party anthems, died today of causes yet to be revealed. Castor’s death was confirmed on Twitter this afternoon by his grandson, P.J. Romain. The singer was 64.

Born in Harlem, Jimmy Castor tasted his first morsel of fame in 1957 when he briefly replaced troubled doo-wop singer Frankie Lyman in Lyman’s group the Teenagers. Castor floated around the New York scene for a while after that before scoring a solo hit in 1966 with the Latin soul record “Hey Leroy, Your Mama’s Callin’ You” (famously sampled twenty years later by the Beastie Boys on their track “Hold It, Now Hit It”). The formation of the Jimmy Castor Bunch came in 1972; that group would pepper the ’70s with an array of goofy funk jams like “Troglodyte (Cave Man)” and “The Bertha Butt Boogie.” Despite their often laughable themes, everything the Castor Bunch played was founded on a bedrock of serious musicianship, and the group was indeed respected within the funk community.

Once the Me Decade faded away, Jimmy Castor’s flame was kept alive by scores of pioneering hip hop artists who sampled his music in their own. Said hip hoppers include but are not limited to Grandmaster Flash & the Furious Five, Erik B. & Rakim, the Ultramagnetic MCs, Big Daddy Kane, 2 Live Crew, House of Pain, the aforementioned Beastie Boys, and even N.W.A. No less than Kanye West has sampled Castor in the Twenty-First Century, using a portion of 1979’s “I Just Wanna Stop” on the 2004 College Dropout track “We Don’t Care.”

I went through a deadly Jimmy Castor phase circa 2007. Anyone who rode in my car was forced to listen to the JCB’s greatest hits CD, particularly “King Kong.” I adore that silly ode to Hollywood’s most beloved giant ape. It’s easily my favorite Jimmy Castor composition. Never fails to melt my blues away.

My condolences to P.J. Romain and the rest of Castor’s surviving family. I’m sure he’ll keep the afterlife extra funky and fun for everyone stuck on that unfortunate side.