The Groundhog Doesn’t Actually Live In That Tree Stump, FYI

Here I am on sacred ground with my pals John P. and Jim R. in 2008. We drove four or five hours one faithful Saturday afternoon that March with our other buddy Ben D. just to visit Punxsutawney Phil, the master rodent of weather prognostication, in his natural habitat. Yes, I am suppressing a giggle because I am standing in an area known as “Gobbler’s Knob.”

The original plan was to attend that year’s G-Hog Day festivities on February 2nd; we pushed our journey back, though, because it turns out Punxsy Phil is accessible to the public any time of year via a glas-encased enclosure adjoining a library in the center of town (no, he doesn’t actually live in that tree stump!) and the general consensus amongst us jerks was that the weather might be friendly thirty days after the fact. We nearly broke our necks on that icy fallacy the minute we stepped out of the car.

For some reason, the four of us felt compelled on this trip to make our definitive “top ten favorite albums ever” lists. Here, Ben and I pretend to present Punxsutawney Phil with our selections (“He just declared six more weeks of Metallica’s Black album!”). Fun fact: the town keeps Phil’s fake stump at Gobbler’s Knob heated so he may achieve maximum comfort for the fifteen minutes a year he spends snorting around inside. 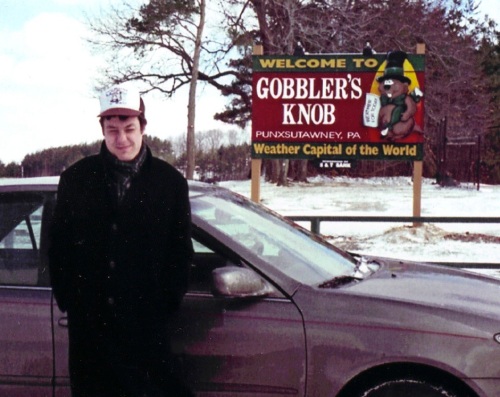 Oh hey, did I mention it was like five degrees in Punxsutawney when we were there? Because it was. Suddenly I gained a newfound respect for all those rebels who fought in the Battle of Hoth.

Four winners standing outside the groundhog’s permanent home at the library. Phil was taking a nap in the back of his area at the time, so we couldn’t really get a good picture of him. Another fun fact: the police station is located right next to the library. Thus, you’d better have some kind of incredible escape plan if you go in there with the intent to kidnap Phil (don’t waste your time trying to kill him, because according to his handlers this rodent has achieved immortality thanks to some secret magical elixir they mix into his gruel).

In fact, a cop came striding out to meet us when we were less than ten feet away from the “Groundhog Zoo.” I guess he could tell we weren’t locals. What gave it away, Officer? Was it my trucker cap or my friend John’s five hundred dollar sneakers?