A companion/reaction piece to Rob O’Conner’s recent listicle for Yahoo. Robbo hit all the biggies, but hey, listen, there are all these others. Entries are not numbered because I simply jotted titles down as I remembered them. I couldn’t possibly rank these fine works.

The Gits – Frenching the Bully

Quoting myself: “The Gits…bashed out sharp barre chord combinations with a bluesy twist that perfectly accentuated singer Mia Zapata’s deep, gutsy attack…1992′s Frenching the Bully was a diamond drill of raw nerve, one that ground its targets into a fine gruel.”

Is there irony in a seventeen year old singing “I Hate Children?” Yes, but only if you’re over twenty. The Adolescents offer sneering SoCal skate punk with the occasional detour into airy, soaring melodiousness. More sensitive than the Circle Jerks, but just as worthy.

Posturing, theatrical, totally laughable when it isn’t legit frightening. The only thing weirder than Lee Ving’s opera singer-meets-redneck vocal style is Philo Cramer’s demented guitar work. “We Gotta Get Out Of This Place” might convince you to hide under the covers all week. 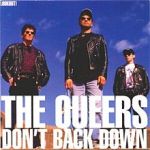 The Queers – Don’t Back Down

This record defines the Queers aesthetic (beer + girls + Johnny Ramone + Mike Love) just as well as any other. The production is flawless, though, and Joe King never wrote better heart-poking anthems than “Number One” and “Love, Love, Love.”

If you can’t beat ’em, confuse ’em. These peace punks attempted to deflate white supremacy/neo-nazis by latching on to corresponding imagery. The results were mixed, but they wrote some classics (“Degenerated,” “Anytown”) and that guitar sounds gloriously like a vacuum cleaner.

Doc Dart unleashes his inner toddler, throwing a tantrum over all manner of authority while his band mates whip up churning, dissonant noise. Interspersed between the songs are Dart’s various phone entanglements with law enforcement—which prove equally enthralling. 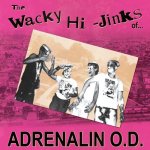 Pushing hardcore to the brink of utter blurriness. Goofball humor takes the edge off (“Rock n’ Roll Gas Station,” “AOD vs. Godzilla”). The song about hating Trans Ams might be subterfuge, though. These guys are from Jersey. 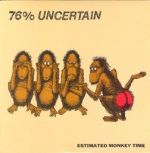 Another one that leans metal but retains its cred. Contains the best (and perhaps only) hardcore punk song written in favor of curbing dogs. And how can you dislike any album boasting a song called “Monkey Jam” that features record scratching?

Replacements – Sorry Ma, Forgot to Take Out The Trash

Raucous Americana punk that masks genius songwriting and arrangement with shambolic, self-deprecating noise. No question these guys would eventually rule the indie rock wastelands. Crown jewel of the Midwest.

Cramps – Songs The Lord Taught Us

The seamy underbelly of rockabilly is nothing if not punk. Lux Interior was walking catharsis wrapped in leather, and the Cramps were living, breathing sex. You’re not from the right planet if you don’t like at least some of Songs The Lord Taught Us. 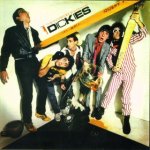 Helium-voiced basket case convinces Iggy Pop’s drug dealer to write songs about conquering or being crushed by social anxiety. The results gave Billie Joe Armstrong and his friends a nice template to work with fifteen years later. They also cover Sabbath and it is awesome.

Be Your Own Pet – Get Awkward

That spunky girl from your middle school grew up, went off her meds, and recorded a playfully violent collection of songs that occasionally reference Robocop, zombies, and friendship bracelets. Like, OMG, she will fucking cut you, bitch.

The lowest of the lo-fi, Guitar Wolf turn everything up to eleven and end up sounding like they’re trying to outplay a space shuttle launch. It’s charming, considering their musical style is pure 1950s motorcycle rock. A helmet may be required, but it won’t protect you. 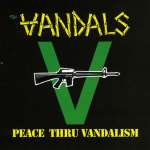 The Vandals – Peace Thru Vandalism

In which sacred cows—Elvis, your mother—are grilled up over a flame of particularly crude racket. “Anarchy Burger” continues to reign as perhaps the truest expression of the “a” word in the genre. I don’t remember Crass ever telling people to piss on cheese.

Burgeoning roots punk. Very heart-on-sleeve. The whiskey-worn vocals of a young Mike Ness bring it all home, even when he’s yawing about the same societal norms other bands have taken to task. The yearning title track should have been an FM radio hit.

GG Allin & the Jabbers – Always Was, Is And Always Shall Be

GG was way tuneful before he was King Gross Out, and Always Was is that fact’s invigorating testament. On the real: “I Need Adventure” and “Unpredictable” are at least as good as better than anything the Dictators ever did.

Notorious San Fran rabble rouser tries injecting some tight-ass funk into his new wave, which only serves to underscore the drugginess his Pass the Dust outlines. You’ll feel like you’ve been awake all night after listening for only three minutes.

Watershed moment for the “modern” sound of punk. Perfect harmonizing in place of snot, erudite observation in place of unfiltered rage. Makes a great case for book learnin’. And you can still probably gleam the cube to most of this ish! Thrash on, library card bros!

Rosemary’s Babies – Talking to the Dead

One of the few horror punk band outside the Misfits worth serious investment. They reject work, school, and religion in favor of bondage, necrophilia, and blood lust—and you believe them. May not actually be possessed, but certainly disturbed.

Antidote – Thou Shalt Not Kill

Just the most livid New York hardcore. Eight songs, nine minutes, but hey, it’s not a contest. However long this is, you won’t forget the palpable sensation that Antidote are not fucking around. See the militant and white hot “Something Must Be Done” for absolute proof.

Best song protesting romance (“Won’t Fall In Love Today”). Best song protesting the mental health system (“Institutionalized”). Best censorship (“I Shot Reagan” altered to “I Shot The Devil”). So furious you can’t even follow it at times but completely delicious.

The Dwarves began as trash punk dedicated to satisfying the id. You can call it low brow, you can call it depraved, but you can’t call it boring and you sure can’t call it weak. Filthy sex maniacs obsessed with prescription drugs need a soundtrack too. 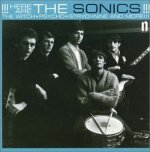 Sonics – Here Are The Sonics

Quoting myself again: “America’s first true punk band, the Sonics played…so loudly [that] every single instrument on their records had a beautiful natural distortion…did any other pre-Iggy white guy scream as satisfyingly as lead Sonic Gerry Roslie? You can feel [him] in your tailbone.”

The B Boys were ahead of the ’90s pop punk pack by about five years. They’re big in Germany, but they should be even bigger here. Screeching Weasel without the guilt? Sure. “Dee Dee Took The Subway” is oddly romantic for a song about a junkie on mass transit.

All the angry punk bands of the Bush years were actually just one band in Wales. Overflowing with bile, jagged hooks, and a decidedly sour charisma. Still, they could be pretty cheeky sometimes–see “The World Loves Us And Is Our Bitch.”