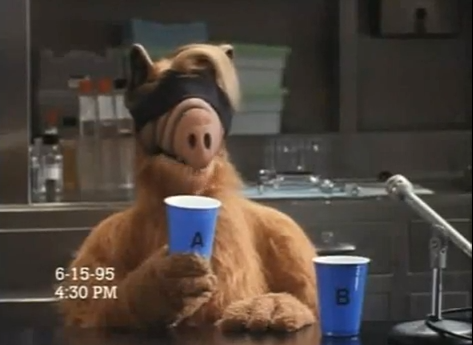 The most redeeming aspect of NBC’s “ALF,” the 1980s sitcom centered around a wise-cracking alien and the California family he imposes upon, has to be the interplay between puppeteer/series creator Paul Fusco and Max Wright. As beleaguered patriarch Willie Tanner, Wright’s reactions to and subsequent verbal damnations of ALF’s shenanigans are at times a laugh goldmine on par with such perpetually miffed legends as Oliver Hardy and Bud Abbott. Willie Tanner’s pain is so visceral, and why not? The idea of alien races as cultured, classy beings shattered by this repugnant wart hog bearing all the worst aspects of Uncle Buck—wouldn’t you burst all your blood vessels as well? Thus, the cardinal sin of Project: ALF, the 1996 made-for-tv movie that attempts to pick up where the original series left off six years earlier, is the complete absence of Wright.

It’s no secret that over the course of four seasons Max Wright grew to hate working on “ALF.” Specifically, the actor resented spending long laborious hours in an audience-free vacuum where week after week he watched the puppet get all the best lines. The odds that Project: ALF’s creators reached out to Wright are about 50/50 in my estimation; the fact they continued without him underscores Paul Fusco’s hubristic belief that ALF could be a barrel of yuks with any given reasonably talented straight man.

Thus, Project: ALF lines ’em up for the orange rug to knock down: Ed Begley, Charles Robinson, Miguel Ferrer, and Ray Walston all pop up to match frustrated wits with ALF as the film takes our hero from a secret military base (where he lives in pronounced luxury) to suburban wilds and eventually the hands of a shady former NASA employee (Ferrer). None of the aforementioned greats lives up to the ALF challenge, if that’s what you want to call it. The magic just isn’t there. Even the consistently underrated William O’Leary can’t serve acceptable Max Wright substitute, though he does mine the most laughs out of ALF’s assorted nonsense. O’Leary plays a good-hearted lieutenant who, along with his superior officer/token love interest (Jensen Daggett), is trying to save Melmac’s last son from certain extinction at the hands of Martin Sheen’s evil colonel character.

Yes, Martin Sheen took a turn in the “ALF” comeback movie. A year later, Sheen played one of the most controversial roles in TV history, voicing the “real” Seymour Skinner on hot button “Simpsons” episode “The Principal and the Pauper” (nerds are still riled up about that story line, trust me). We can only assume Martin was having serious personal problems during this time period and work of any kind was his only respite.

The most frustrating aspect of Project: ALF is that with a little more work it could have been great. There are a handful of sharp jokes and fun little set-ups throughout the film. Unfortunately, an err toward laziness—mostly in shot blocking and editing, but also in the arsenal of dated one-liners ALF tosses off about ’90s-specific events/figures—stalls Project: ALF miles away from existing as a tight, quirky epilogue to the beloved NBC series (“ALF’s” producers, verbally promised a fifth season, ended season four in 1990 with an “ALF gives himself up to the government” cliffhanger; sagging ratings convinced NBC to renege on their deal). You know you’re in trouble when you’ve got Miguel Ferrer and he appears to be dying of boredom.

A couple times ALF looks the same way—bored beyond recognition. Perhaps the puppet became sentient during production and that’s why we have yet to see Project: ALF 2: Melmackian Boogaloo. Maybe even the swath of carpet knows it ain’t really ALF without the opportunity to shout, “Hey, Willie!”

FINAL SCORE: One and a half Gordon Shumways (out of four).