A North Carolina native who claims to have only driven by South of the Border “a few times,” bass player Sean Yseult is best known as the co-founder of heavy metal horror groovers White Zombie. For thirteen years Yseult stalked stages worldwide with her WZ band mates, often proving the most colorful image in the assembly thanks to her shock of greenish-yellow hair. Her fluid playing made anchoring this noisy beast look effortless and helped catapult the aural pastiches that are White Zombie’s recorded albums into the pantheon of unmistakable rock greatness.

Since White Zombie’s untimely 1998 burial Sean’s kept busy in her adopted home of New Orleans by lending her talents to such similarly spook-based acts as Rock City Morgue, Star & Dagger, and Famous Monsters. She’s also found success with a line of fashionable scarves bearing her name, not to mention a creative partnership with noted mixed media artist Louis St. Lewis. Sean was kind enough to set aside some time this week so I could grill her about participating in the 1996 Germs tribute album, working with Chris Farley on Airheads, and where things stand with her former right hand man Rob Zombie.

JG2: You’ve spoken in the past about how unexpected White Zombie’s global success was to you and the other band members. Did you ever have a Dave Chappelle moment where you thought you wouldn’t be able to handle it, like you just tripped out too hard?

SEAN YSEULT: [laughs] No, it didn’t happen that fast. We had a slow, steady climb. It was never overwhelming or shocking. It took a while. When we got there, though, to the stadiums and MTV, it was like, “Wow!” But we would have been just as happy playing clubs and dive bars, like on that level.

JG2: So if it was a slow climb, then I wonder—was your family supportive of the whole thing? Did they ever want you to “find a real job?”

SW: No, I was lucky, my parents were both pretty bohemian. They’d crank Hendrix and stuff when I was growing up, so they couldn’t really say anything when I [pursued music]. In fact, much to my embarrassment, they’d come to [White Zombie] shows sometimes and bring their dope-smoking friends.

SY: No, you know, we started out so young and it was just continually happening, we weren’t even thinking about the future. I mean, none of us had anything else we wanted to do. All we wanted to do was play music. And, y’know, we got really lucky. [laughs]

JG2: Yeah, a couple Platinum albums, I’d say it worked out. So you had a bar down there in New Orleans for a while, the Saint, but Wikipedia says it closed? Why did it close?

SY: Oh no, we actually sold it and it’s still there. My husband’s little brother owns it now. You know, owning a bar was never part of our dreams. The Saint kind of fell into our lap, so we did it for a few years, but post-Katrina it was such a struggle. And it was eating into our creative life. We’re both musicians, that’s what we really want to be doing, so we sold the bar.

JG2: I’ve never been to New Orleans and I don’t really have any concept of the pre/post-Katrina situations. Is the city still recovering?

SY: No, the town is so much better now than it was before. There are so many new shops and bars, there’s constant building going on. People are moving here for the right reasons, they’re moving here from New York and L.A. and all these other places to be productive. Before Katrina, people would move here to live the “drunken poet” life, just waste away, you know? But it’s not like that now. Everyone wants to help the city grow and it’s great.

JG2: Correct me if I’m wrong, but I remember hearing the original version of White Zombie’s breakthrough 1992 album La Sexorcisto was rejected by Geffen for having too many samples a la Paul’s Boutique. Is that true?

SY: That’s partially correct. We did a demo of La Sexorcisto that had four songs and on that there was a lot of things we couldn’t get permission for. One was a Charles Manson interview soundclip. You think he’d be cool with that kinda thing, but he flat out said no.

JG2: Wow, yeah, it’s not like his reputation can be any further damaged.

SY: Right? I think another clip we couldn’t clear was a “Star Trek” thing. I don’t remember.

JG2: Was there anything you couldn’t clear that hurt the final product, you thought, or really bummed you out?

SY: No, I think the only crucial stuff is maybe the Russ Meyer clips in “Thunderkiss ’65.” Russ Meyer was really great, he gave us total clearance and was very nice about it. But the other stuff, the stuff we had to axe, was no big deal. Well, to me, anyway. I’m sure if you asked Rob he’d be able to give you a list of the samples he’s still angry about losing.

JG2: How many times did you have to watch Chris Farley rip off that guy’s nipple ring when you were shooting White Zombie’s part in Airheads? 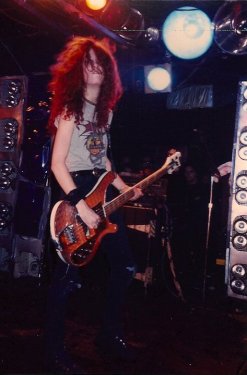 SY: [laughs] A lot! What an amazing cast that movie had—Chris Farley, Adam Sandler, Steve Buscemi. We got to hang out with those guys for twelve hours for that thirty second shot. I learned to respect actors that day. It really took us twelve hours to do shoot those thirty seconds! There was a lot of down time that day, and between shots Chris Farley kept pulling up near the stage in this golf cart and flipping it over, totally wrecking it again and again, like a little kid trying to impress his friends. He’d be screaming, going crazy, it was so funny. Adam Sandler’s first comedy record had just come out and he invited us in his trailer to hear it to see what we thought. It was just a really cool day. That was one of my favorite experiences from my time in White Zombie.

JG2: And you’re in the half of Airheads that’s good!

SY: Oh, thank you! That’s good to know. We also got to record with Brendan Fraser—they had the band in the movie use a Reagan Youth song and since we were already there they asked [White Zombie guitarist] J and I to go play on the rerecording they used. So we got to be in the studio with Brendan Fraser, and this was before he was really famous. So that was cool too.

JG2: Speaking of odd studio partnerships, what’s the story with Ruined Eye, the one shot thing you did for the Germs tribute album, A Small Circle of Friends? Who was even in that band? How did it all come about?

SY: Well first of all, I love the Germs, they’re one of the bands that got me into punk and hardcore in the first place, and I will say the song we did [“Land of Treason”] was given to us, we didn’t necessarily pick it…but that’s okay. That all came about while White Zombie was on tour. The band was myself, J, Dave Navarro, which was awesome, and Keith Morris from Black Flag and the Circle Jerks. Someone’s going to be very mad at me but I can’t remember who the drummer was. [turns out it was Greg Rogers – ed.] I honestly don’t remember how it came together, either. Maybe Keith put it together? J and I knew Keith previously. You know, we toured so much, a lot of this stuff just runs together.

JG2: Being on tour like that, do you often forget not just little stuff like that but also what day or month it is?

SY: Yeah, you just give up after a while, you’re in this fantasy world. Sometimes I’d even forget what year it was. Seriously, I had no clue.

JG2: Are there things you feel you still want to accomplish as a musician?

SY: Hmm, well, I’ve never had any goals, I really just want to be able to keep writing music and keep performing. I’ve been doing it my whole life. I’ve been playing since I was five.

JG2: And there’s never been a time where you thought, “Maybe it’s time for a break?”

SY: Well, after those intensive years of touring with White Zombie for La Sexorcisto and Astro Creep 2000 I took a year off from playing. But it wasn’t that serious—I still brought a guitar down here with me to New Orleans. [laughs]

JG2: It’s no secret things ended oddly with White Zombie and that Rob doesn’t really talk to any of you folks anymore. If Rob Zombie called you up tomorrow, though, and said, “Listen, I want to apologize, I’ve been acting less than friendly and not treating you people right, I wanna make amends,” would you accept that and try to sort things out, or is it too late?

SY: I would totally accept that. I still don’t understand what happened; [our romantic relationship ended] amicably, we even shared a room after we broke up. I don’t know why he doesn’t want to talk now. I don’t have any issues with him, he shouldn’t have any issues with me. He met the love of his life right after we broke up, they’re married now—he should be thanking me! [laughs] I’m married to the love of my life, I’m happy.

JG2: Did you have another album in you past Astro Creep 2000?

SY: Yeah! [J, Rob, and I] had a three way phone call after that last tour about getting back together to work on stuff. J and I had all these riffs and ideas, and Rob just said, “I don’t think so.” A month later his solo album came out. So, you know, he already had that figured out. [laughs]

First photo swiped from the Internet—if you took it let me know and ye shall receive credit; second photo (taken in 1988 when White Zombie were still learning how to walk) swiped from Sean’s Facebook page.