Deck The Halls With Some Ewoks 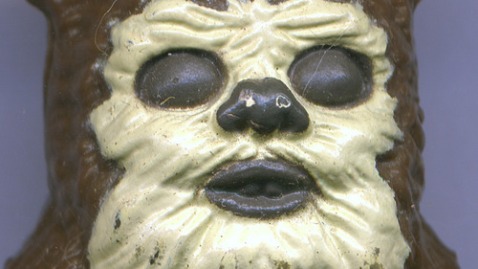 Return of the Jedi’s thirtieth anniversary is just one week away. I hope you’ve got your shopping done. I’m just kidding—we’ve all poured enough money into the Lucasfilm merchandising juggernaut already. If we melted down all the Chewbacca figures sold between 1977 and today there’d probably be enough plastic to make prosthetic limbs for every single person who’s stepped on a forgotten land mine since Star Wars first came out. Not to depress you or anything.

That reminds me of a hilarious story: I was four when Jedi came out and even though I was already amped on America’s number one space opera I didn’t want to see this final installment because Jabba the Hutt looked really scary in the tv commercials. My grandparents bought us all tickets to see the thing anyway, and I was just beside myself that entire morning. Kid logic told me I’d die of shock the moment Jabba came onscreen. Shortly before the movie’s showtime Grandma and I were wandering around K-Mart when I became instantly enamored of an Admiral Ackbar action figure on one of the toy racks. For whatever reason (he looked like a fish person and I liked fish?) this Ackbar toy was shifting the tectonic plates of my Jedi stance. I stood there in a weird daze.

“I’ll make you a deal,” my grandmother said as I clutched the Admiral’s blister pack like it was my only food for the day. “I’ll buy this man for you if you go see the movie with us. Okay?”

There was a brief pause.

“Oh-kay!” I shouted like one of the Little Rascals.

Nothing quells fear quite like spontaneous consumerism. The only memory I have from the actual presentation of Jedi that day is having to pee really badly during the speeder bike chase. Grandpa sensed this, trotting me out to the bathroom so as to prevent me from ruining the fine upholstery at the Sanford, Florida megaplex. I hated giving in, though, because the speeder bikes were so super cool. The theater bathroom was far less enthralling. Once you’ve seen Mark Hamill racing through the Redwood Forest on a space motorcycle self-flushing toilets seem less than outré.

I feel like I’ve told this story before elsewhere, but this version is really the best. Ewok image courtesy of Merchandising Is Forever. Stay tuned for more baloney like this in the coming days.

One response to “Deck The Halls With Some Ewoks”