What, No Pepsi Free? 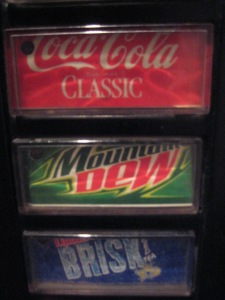 Last week my friend Matt let me tag along with him to KDS Studios where his band Grave Return is working on their full-length debut. As mentioned previously, KDS is the organization that now occupies Lou Pearlman’s old recording facility in Orlando, the lavish audio bunker Pearlman built under the assumption his Boy Band Reich would last a thousand years. After seeing the place allow me to say: “Big Poppa” may be the Madoff of pop music but the guy knows how to construct a studio. It’s the kind of spacious yet cozy wood-paneled fantasy you see in movies.

KDS employees have decorated the walls with various awards trumpeting their own accomplishments (platinum sales markers presented for work on such entries as Ministry’s Psalm 69 and Björk’s Post), but there remain a few reminders of the former regime. In fact, the first thing you see when you waltz through the front door is a collection of framed Backstreet Boys albums on the opposite wall. The albums were hanging crooked the night I showed up, as if to say, “Yeah, Nick Carter once haunted these halls, but that was a few presidents ago.”

Stranger than Nick Carter’s ghost: the KDS Studio vending machine has an option for Coke with “CLASSIC” written in such a large font you’d assume it was installed in 1985. Maybe it was. Maybe this is Lou Pearlman’s favorite vending machine, the one he was buying a Shasta from when he first heard a young Chris Kirkpatrick harmonizing outside a Stuckey’s in Memphis (or however that part of the N’Sync story shook out). This guy was running a multi-million dollar Ponzi scheme; he could probably afford to track down a Mid-South vending machine if such was his wont.

Obviously there’s a lot of Lou Pearlman/Trans Continental lore we won’t be privy to until long after all those boy banders are dead. I’m sure personal Coke dispensers are just the tip of the sweaty, diamond-encrusted iceberg.