Unsolicited Thoughts / Notes On Everybody Loves Our Town 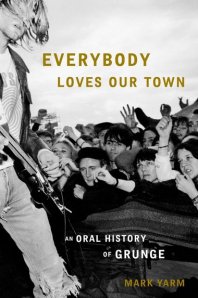 – Courtney Love is the Richard Nixon of grunge; can you imagine how powerful she’d be without the pettiness and the insecurities?

– speaking of Layne, the only grunge myth the author fails to bust, prove, or even address is the one where the Alice in Chains singer was ousted from “Celebrity Jeopardy!” for giving Alex Trebek the finger (actually I think this was disproven years ago but I want to keep the idea alive that Staley was an expert on the Dead Sea Scrolls, the alleged subject of the question in question)

– the singer from Candlebox (who are from Seattle!) did not sleep with Madonna when he had the chance, something his then-wife admonished him for when Candlebox’s career went down the toilet (this woman and Mr. Candlebox are now divorced)

– Everybody Loves Our Town presents a fairly complete and undeniably engrossing map of grunge from messy start to even messier finish; I only wish the book included a rebuttal from Glenn Danzig regarding the alleged $12,000 guarantee Jeff Ament claims Danzig’s band Samhain had for a show in Detroit in the mid-eighties