You Will Never Find A More Wretched Hive Of Sombreros & Fireworks 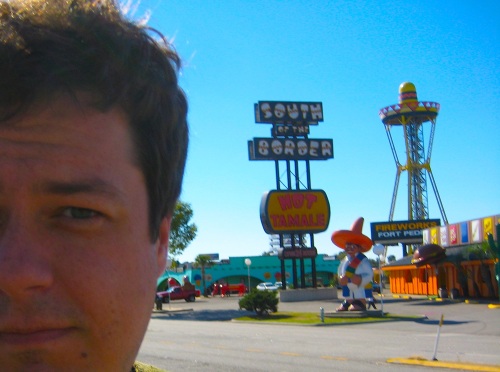 Greetings from the East Coast’s capital of tackiness, South of the Border. It’s a truck stop, it’s a motel, it’s a living breathing anachronism from several decades ago nestled between North and South Carolina. I was in the area researching an unrelated story but the pull of this plasticky garish nonsense proved too strong. Don’t worry, I restrained myself from spending money on anything other than gas, though I’m sure their five dollar shirts emblazoned with the trendiest slogans of 2011 are of the finest quality.

EDIT: It’s been ten hours since I posted this and not a single one of you has stepped forward to angrily correct me regarding South of the Border’s exact location. SOTB sits not upon the border that separates our Carolinas but a few yards below it (hence the site’s “clever” name). I assume this to mean we are all in agreement that SouBor (as the fans call it) is not part of the United States proper and is its own sovereign nation.