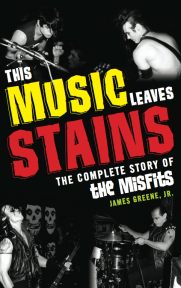 The Association For Recorded Sound Collections has nominated my Misfits book This Music Leaves Stains for a 2014 ARSCy Award (that’s what they’re called, right?) for “Excellence in Historical Recorded Sound Research.” Apparently there’s a subcategory to that, like “Rock” or “Pop” or whatevz, but said classification hasn’t been announced yet (nor has a complete list of nominees).

What can I say? Turns out all our favorite celebrities weren’t lying—it actually is an honor just to be nominated. I’m plenty happy with that. Thank you, ARSC, appreciate it.

ARSCy Winners are announced in or by September…plenty of time to shop for a gown to wear to the fabulous awards gala. Gonna put Beyoncé to shame, gonna make her wish she was never born.