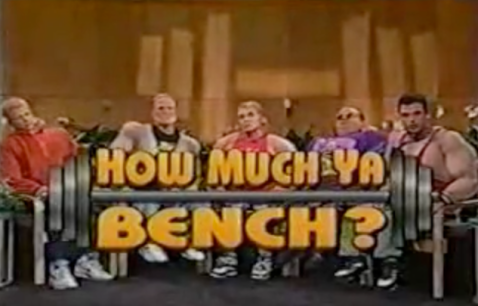 Earlier this week former Misfits guitarist Doyle “Wolfgang Von Frankenstein” Caiafa (né Paul) announced that he (and ostensibly the world) is ready for a touring / album reunion of “the original [Misfits] lineup” and that he is in fact the “only one” capable of brokering such an auspicious event. Quoth Doyle:

You know what? I’ve just decided this week that I am going to make an attempt, and I wanna do it. I’ll put what I’m doing right on the fucking side. I’ll go do it tomorrow.”

Great, I say with one hundred percent earnest, even though by “original” I’m sure Doyle means his early ’80s era of the band, which if we’re being polite was at least the fourth Misfits iteration. I am coming at you honest and true from my heart of hearts when I say it would really be something special to see founder Glenn Danzig, founding bassist Jerry Only, Doyle, and drummer Arthur Googy doing anything together, even if it was just twenty minutes on the side stage of some bullshit-ass festival. If you pressed me I might even use the term “magical.”

I am burying the lede, though. Scroll through the many comments on the aforelinked article and you’ll find a couple accounts from singers who tried out for the Misfits reformation that began in 1995 (and continues to this day with Only as the sole original member). I’m sure it will surprise absolutely no one familiar with the muscle-bound punk band to learn there was, allegedly, a weight lifting requirement.

“I was trying to get an audition with the Misfits back when they were looking for a replacement for Danzig,” writes Paul LaPlaca. “I answered an ad in the [Village] Voice…[and] I was given a machine gun series of questions on everything from my influences to how much I could bench press. I blew the interview when I asked who I was talking to. He said, ‘Jerry.’ As I took it down with pen and paper I asked, ‘And your last name?’ ‘Jerry ONLY. The BASS player.’ click.'”

“I also remember being asked how much I could bench press,” replied Edward Martin.

Disclaimer: LaPlaca and Martin might be trolling us fiends, feeding into the meathead Jersey Boy stereotype some people like to believe the Misfits embodied / still embody, but I don’t think their claims are too far-fetched. Physical stature has long been a key component of the Misfit image, and it’s not like they’re saying Jerry asked them to name their favorite New York Giants place kicker. If this bench pressing thing is true, one must wonder the exact number for entry into this legendary band (250? 300? A Buick?). Also, how much could Michale Graves bench in 1995? He clinched that open vocal spot despite looking no stronger than any given Baldwin. 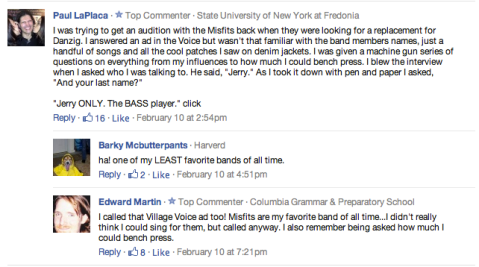 Oh, and since I’m sure everyone reading this remembers the “Saturday Night Live” skit the the top image is taken from there is absolutely no need to discuss it beyond this sentence.

3 responses to “Misfits Allegedly Had Weight Lifting Requirement For Singer”