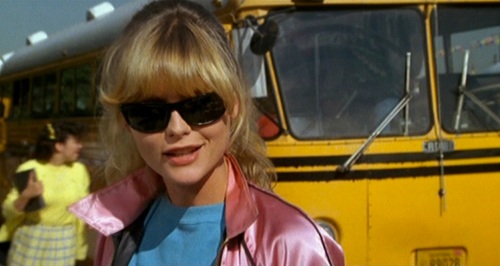 – if we’re to believe this movie, the sport of bowling is an alien concept to the British and they need guidebooks just to have conversations about it

– if we’re to believe this movie, Adrian Zmed is a fucking great singer

– Eddie Deezen is only in Grease 2 for about three minutes and does not seem to be present at the final graduation scene (spoiler alert); this must mean Deezen’s character flunked out or died…we’ll never know for sure, though, because plans for Greases 3 & 4 were scrapped after this one imploded at the box office

– can you imagine the suffocating reheated hell of a Grease 4?

– it’s incredible how absolutely bland the music is in this high profile major studio musical; Michelle Pfeiffer’s big number is called “Cool Rider,” about how she wants to date a cool rider (of motorcycles), making “Greased Lightning” from the first movie look like Chaucer

– Tab Hunter is in this; yes, they make him sing, but he emerges unscathed

– of course the action climaxes in a motorcycle melée / pie fight that breaks out in the middle of a homecoming luau, but since this is Grease 2 the entire set piece is less exciting than a trip to Big Lots

– if you’re in the market to make ninety minutes feel like five hours, run don’t walk to the nearest copy of Grease 2

– if you’re in the market for gratuitous Deezen, take your ass to War Games