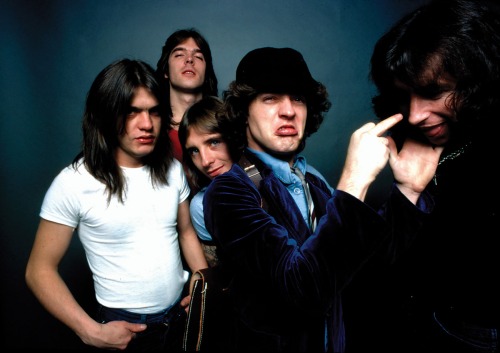 According to me, some ding dong on the Internet.

They said bagpipes could never work in rock music. They were wrong.

Everything you need to know about the late Bon Scott in three and half minutes: he’s charming, he’s got a strong voice, he’s in control, he might sock you in the face if you give him any guff. Very Sinatra, in a way, and it isn’t hard to imagine Frank putting his spin on this rakish bruiser. Of course, the Old Man woulda cut the “oi” chant, on accounta it ain’t classy.

AC/DC rewrite “T.N.T.” with the new angle: “what if we were mean, but like, professionally, as a commercial service?” The damn thing works, right down to the anguished scream that punctuates the ending.

Yes, I’m counting these as one song. “Rocker” is a hilarious freewheeling apology for the juvenile “Balls”—it’s AC/DC saying, “listen, we’re just dirty rockers, what did you expect? We’ve happily wasted one of our best slower arrangements on a drawn out testicle joke.” I realize “Rocker” did not make its debut backing up “Balls” on Dirty Deeds; I know it came out a year earlier on T.N.T. and that it only appears on the international version of Deeds, but I refuse to apologize for not being Australian. Besides, as noted, this pairing gels like Moe’s hand and Curly’s forehead.

“Let There Be Rock”

As satisfying as watching a golden retriever chase its tail. Knocks over as much furniture, too.

A celebration of the zaftig woman built around one of history’s most shit-kicking guitar riffs. If you can’t boogie to this get the hell out of my car wash.

The sinner’s anthem, but it’s hard to tell where the protagonist is emotionally. Is he joyous? Is he resigned? Is he daring to exercise irony? It doesn’t matter when that hymnal of a chorus kicks in.

Catchy strut of blues cloaked in darkness not just because it’s about murder but because AC/DC denied it being about murder after a murderer cited it as inspiration to murder. Does that compel me to keep returning? Sure, but so does the musical performance, and I remain more mystified by Bon Scott’s decision to end the tune by impersonating Mork from Ork. If this song is really so evil Richard Ramirez would have also tried to kill Pam Dawber.

A monster truck being driven by a grizzly bear in sunglasses, crushing your fears and doubts and delivering you a sizzlin’ onion burst of empowerment. I don’t know, you try to explain the omnipresence and worth of the ultimate “hard rock” song.

This band wrote a lot of material about their dicks. This selection is the least stupid. Also, for some strange reason, I’m really partial to the lyric about the “baaaaad man cruisin’ around in a big black limousine.” Maybe that’s what I aspire to, secretly.