Got No Time For Front Porchin’ 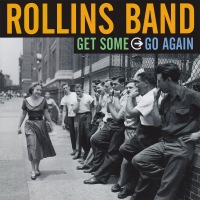 Previously I speculated that Henry Rollins did not view the Mother Superior years of Rollins Band to be canonical because he did not discuss them during the Rollins Band episode of his podcast, “Henry & Heidi.” Boy, was I wrong: in April Henry and his bubbly co-host recorded a follow-up specifically to talk about the Mother Superior stretch of RB and how that time span was actually his favorite writing and performing experience (ever).

I listened to this ep last night and of course it spurred me to revisit Get Some Go Again, the 2000 debut from Rollins and Mother Superior (released under the Rollins Band moniker at the behest of Dreamworks executives, according to Hank). They sure sound like they’re having a blast. Still too derivative and underwhelming for me to put it in regular rotation, but it has its moments. The title track, specifically, and the bit in “Hotter & Hotter” where Hank says he “got no time for front porchin'” (my new catchphrase).

Further down the rabbit hole: the video for “Love’s So Heavy.” Is this Rollins being tongue in cheek or is he living out his David Lee Roth fantasies? Or both? Either way, have mercy, Rollins. Have mercy!