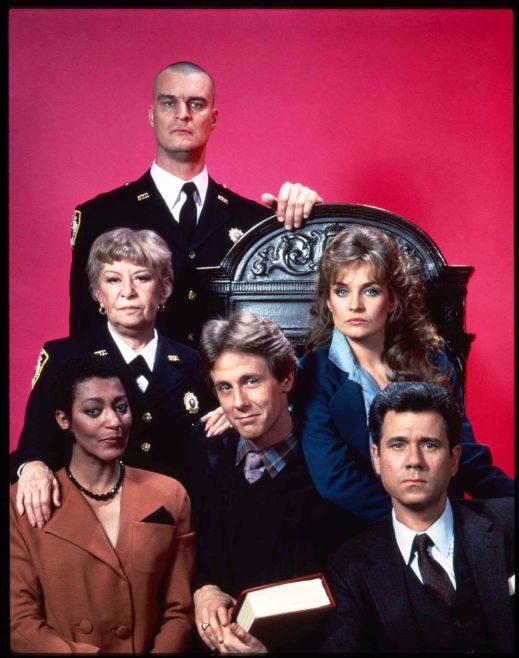 – whenever anyone starts talking about how this program gets strange in its later years, remind them the first episode produced after the pilot consists of guest star Michael J. Fox arguing with Santa Claus until the judge literally smothers him in a hug

– “Night Court” is the 1980s sitcom that took an actor best known for playing a Boston area con man and had him play a New York judge so virtuous they had to balance his morality with a wacky persona (this guy isn’t all nobility; he plays with chattering teeth and whoopee cushions at his bench!); it’s possible Harry Anderson’s “Cheers” character Harry The Hat and Judge Harry Stone are the same individual, a dual personality torn between two cities and two very different codes of honor; then again, no other characters from “Cheers” ever materialize on “Night Court,” and “Cheers” had a crossover with every other fuckin’ show on NBC at some point (even “St. Elsewhere”); don’t worry, a shared universe exists between “Night Court” and one other Must See TV sitcom—the Paul Reiser vehicle “My Two Dads”

– in this first season, Paula Kelly plays savvy public defender Liz Williams, a perfect adversary for John Larroquette’s ego-driven prosecutor Dan Fielding; unfortunately, they don’t give Kelly enough to do and these end up being her only 13 episodes; Karen Austin chews more as clerk Lana Wagner, trying her best to parse Judge Harry’s odd mechanisms while stemming what might be an eruption of attraction on her part; Austin is fun and charismatic in this role but she also did not make it to round two (she was cut loose by “Night Court” producers after developing Bell’s palsy); it’s disappointing these talents were shortchanged but the good news is they had careers long before and after these legal hijinks (and Austin quickly recovered from her malady)

– “Night Court” takes place in New York City thirty years ago but they dress all the bums and lowlifes who wander in and out of the gallery like they’re in a train yard seventy years ago; it’s like the classic hobo review and follies

– Yakov Smirnoff guest stars in one of these episodes; somehow he makes it all the way through without saying, “What a country!”

– call me a cynic but it’s difficult to believe these people are all so chummy after hours; if someone had abandoned a baby with one of the bailiffs at the O.J. trial would Marcia Clark, Johnnie Cochran, and Judge Ito have gone over to the bailiff’s house to help out?

– generally the humor of “Night Court” is timeless but every once in a while the writers slip in the topical, like a Pia Zadora reference (1984 audiences were very ready to laugh at her expense)

– as a wee tyke I’d watch this program and dream about visiting a New York City municipal court; in 2011 I got to live my fantasy after receiving a citation for being in Prospect Park after sundown; to my dismay, it was nothing like on the tv—the judge did not do any magic tricks, the attorneys did not crack any jokes, and overall the experience was vaguely depressing; based on this I am wary of befriending any sheep herders from Mypos