Other Highlights From My Six Months As A Perkins Bus Boy

…In addition to fishing unused jelly packets out of the trash to rinse off and put back on the dining room tables (previously referenced in this post); what a feeling it is to watch an oblivious diner fiddle with a little plastic bin of grape jelly you rescued just fifteen minutes prior from a muggy grave of chewed hash browns and sausage upchuck.

– the other bus boy who exclusively addressed me as “James Bond Jr.”

– my employee evaluation; the only negative bit was “needs to smile more”

– the day I wore Converse to work instead of my regulation grease-proof boots to prove some kind of point (i.e. I won’t CONFORM to YOUR WORLD, oppressors); I slid around on the kitchen floor the entire night

– the Billy Drago-esque manager who raced Kawasaki motorcycles in his spare time and who could never walk out the back door without taking a deep breath, looking up at the clouds, and saying, “What a beautiful day to die!” (he was later fired for sexual harassment)

– being scheduled weekday mornings and having jack shit to bus

– running into the lead manager at a nearby Waffle House several weeks after I quit; she told me I was a great employee and that I could come back any time (this was very nice to hear)

I’ve not set foot in that Perkins or any other since hanging up my bus tub.

This game is meant to be played while watching Music Bank, the Alice in Chains video collection.

Take a sip every time…

Finish your drink every time…

Chug an entire beer every time…

Spray your fellow partiers with a nice sudsy brew every time you hear the theme from “Benny Hill” or any time you see a reference to “The Brady Bunch.”

Happy drinking and rock on!

Unsolicited Notes On That New Alice In Chains Album 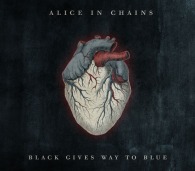 The mainstream rock press is heaping Louie Anderson-sized amounts of praise upon Black Gives Way To Blue (a.k.a. OMG Tha Chains R Back With A Noo Singur LOL!!), calling it another stellar entry in the AiC catalog and in no way a disgrace to late founding singer Layne Staley’s dark legacy. Intrigued, I decided to check this bastard out. Too lazy to whip up a real review, I shall now share with you the notes I took as I sat back in my favorite easy chair a few days ago and let Black Gives Way To Blue wash over me like a bucket of thick paint for the second or third time:

“In case you weren’t aware this [album] is a new beginning, a time to start living; Alice in Chains literally announces that less than a minute into the first song. Guh.”

“The dizzying riff to ‘Check My Brain’ is probably the hottest I’ve heard since Obama took office. But those goddamn lyrics! Oy gevalt. No, Jerry Cantrell, I will not check your brain because you have entered the great state of California.”

“People love to debate whether or not Alice in Chains was grunge or metal. Without Layne’s gutteral vocals, they are most assuredly metal, bordering on the hair variety. ‘Last Of My Kind’ could be a damn Warrant song. It has shades of ‘Uncle Tom’s Cabin.'”

“Layne’s presence is definitely missed. There are lots of tasty textures, though.”

“Most of these tunes are pretty generic.”

There you have it. If you had to chop all that down into one tasty and utterly misleading pull quote, you could do it like this:

So, yeah, bottom line – there are some hot riffs on this bitch, but overall, thang’s generic.

FINAL SCORE: One and a half guys with goatees arguing about what musical category Alice in Chains falls into (out of four).

Yes, There Is New Alice In Chains Floating Around Out There

Jerry Cantrell, Sean Kinney, and Mike Inez have inexplicably decided to record a new album, Black Gives Way To Blue, due this September. Pinch singing for the deceased Layne Staley is William DuVall from Comes With The Fall. Yeah, I ain’t never heard of ’em either.

Earlier today, the reconstituted Chains “leaked” a tune from Black called “A Looking In View.” Talk about an exercise in futility. “Looking” sounds like every grunge retread band circa five years ago got together to write the most listless Alice tribute song possible. Check it:

Just a big gross snot bubble of a song with no sharp hook, riff, or solo. It’s miles away from the Alice we all know and love.

I will never understand why these iconic bands like the Chains and Queen and the Doors attempt reunions after their crown jewel lead singers die. What’s the point? Is the guy from the Cult really going to “wow” us with a better rendition of “People Are Strange?” I’m saying this and I’m not even that big a Jim Morrison fan.

It’s just so off-putting that these clowns would throw together state fair versions of groups people worship the world over just for money or to jack off their own egos. I never buy that shit that there’s a new version of Queen touring to honor Freddie Mercury’s memory. Do you know how fucking offended Freddie Mercury would probably be if he rose from the dead tomorrow and saw someone like Adam Lambert singing his songs? He’d probably go apeshit. I imagine Layne and the Lizard King would have similar (albeit more subdued and drug-clouded) reactions.

The only time crap like this works in any capacity is when the band gets an exact sound-a-like (which William DuVall is not). You know, like when Judas Priest got Tim “Ripper” Owens, or when Journey hired that squealer who looked / looks like Kenny G (haven’t seen recent pics of that guy). Otherwise, it’s just a major disappointment. If I wanted to hear Ian Astbury singing Doors songs, I’d commit suicide—I’m sure there’s plenty of that shit going on in Hell.

Oh, by the way, I put “leaked” in quotations earlier because AiC didn’t just throw the MP3 of “A Looking In View” up on their site. You had to sign up for their mailing list and then they e-mailed you a link. Mailing list? WTF? Is this 1998? Hey, Alice in Chains, when I want to know what’s going on at your Geocities-hosted website, I’ll just turn off “The Weakest Link,” put down my copy of The Dilbert Principle, and dial you up on AOL. I get enough spam from dinosaur grunge bands at is it.