The year was 1980, and the world was enchanted with all things Star Wars. Desperate to get in on some of that sweet Skywalker coin, Coca-Cola created in the image of series star R2-D2 their own funky astromech droid named “Cobot.” Did Coke sell tiny remote-controlled versions of Cobot to clueless children all across the land? Of course they did. Did Coke build life-sized versions of Cobot for personal appearances at malls and grocery stores? C’mon, did you really even have to ask that question? 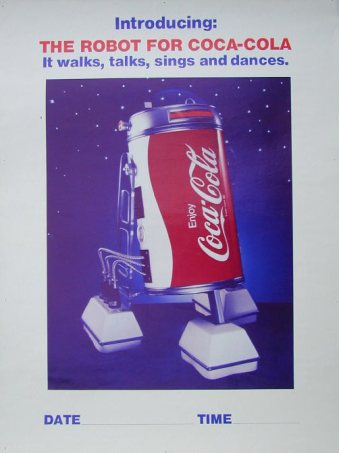 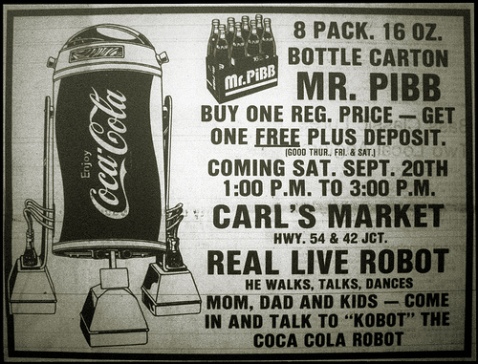 Here’s video of a restored Cobot in action; note how he is nowhere near as expressive, emotive, or interesting as R2-D2:

I’ve spent thirty-three years loving Star Wars and carbonated beverages. I have no idea how Cobot’s existence managed to elude me until today. I am not proud.

Gratuitous Picture Of Myself On The Verge Of Total Sickness 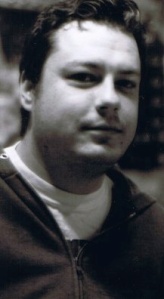 Here I am in Paris in October of 2009, sitting in a pub, waiting for someone to bring me another Coca-Cola. The flimsy hoodie that’s zipped over my frame (K-Mart, $15) was the heaviest garment I brought with me. For some reason, I thought France would be agreeably warm so close to Halloween. I’m not sure why. Guess I really earned that C+ in tenth grade geography. October in France offers plenty of unbridled chilliness, and while I was visiting that chilliness was generally coupled with endlessly dreary rain-streaked skies. This photo captures me mere hours before the worst cold/flu of my life, which I helped nurture by staying up all night at a raucous dinner party where I was the token American who had to explain why Obama hadn’t fixed the world yet. Hey man, I don’t know, just pass me the embalming fluid so my corpse looks presentable for the plane ride home. 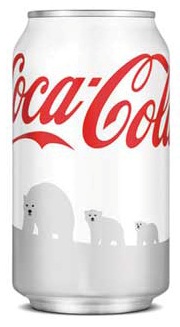 “You can’t change something that’s classic,” seventeen year old Wisoncsin native Mel Cyr told The Wall Street Journal in response to the recent appearance of regular Coke in white cans reminiscent of the brand’s Diet Coke packaging. Coca-Cola’s agreed to bring back the red can we’ve been so conditioned into loving, but there’s still some debate as to whether or not the color is all the company changed. Some seasoned soda drinkers claim the white can Coke tastes, for lack of a better word, “funky.” Coca-Cola claims they didn’t tamper with Coke Classic’s formula, but since when are we supposed to believe a multi-national beverage conglomerate?

I tracked down a few white can Cokes in my neighborhood this morning, and as someone who is more familiar with Coke than most of his relatives I can assure you the soft drink in these cans offers a lighter, less intense flavor of Coca-Cola. It doesn’t taste like Diet Coke, mind you—there’s none of that aspartamy chemical swish. The stuff’s just got less bite than real Coke. It tastes like they upped the sugar and lessened the, uh, whatever it is that makes Coke so bitter. I don’t want to use the “P” word in describing this Yuletide curiosity, but I’d understand if you felt that way after pouring some down your gullet.

Of course, a Coke product that tastes similar to their main competitor harkens back to the 1985 New Coke debacle, an episode regular readers know is one of my obsessions. Is white can Coke leftover New Coke that the company had previously banished to remote Micronesian islands? Is Coke in such dire financial straights that they decided to re-introduce New Coke covertly for the handful of Americans who actually preferred it to Coke Classic? Did somebody make an “uh-oh” at the Coke plant, accidentally whipping up a batch of New Coke for the next two months instead of the regular stuff? Obviously I cannot answer these questions before I take a road trip to Atlanta with a private investigator.

In the meantime, can we get a lobby going to start calling this stuff “Honky Coke?” Is that offensive to people from Newport, Rhode Island? Get back at me on that one, Internet. 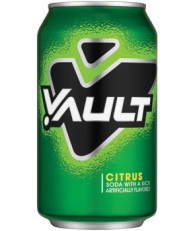 Vault, the citrus “hybrid energy soda” Coca-Cola launched in 2005 to satiate fans of the company’s discontinued late ’90s soft drink Surge, has died at the tender age of six. Coca-Cola confirmed via Twitter today that Vault is now meeting the same fate as Surge—a victim, apparently, of low demand and similarly low sales (or so said the Coca-Cola customer service rep I spoke with just moments ago via 1-800-GET-COKE).

Introduced as the beverage that drank like a soda but “kicked” like an energy drink, Vault was created to quell the sizable consumer element upset over Coca-Cola’s quiet 2002 dumping of “extreme” citrus drink Surge (though the company would never publicly cop to this fact). The formula was more or less the same for both drinks save one major exception: Vault contained roughly twenty more milligrams of caffeine, making it far more “extreme” than Surge, Mountain Dew, and most other youth-oriented pops competing for market share.

Vault was quickly embraced by legions of mourning Surge fans, but the soda had trouble finding footing outside that contingent. A massive commercial push like the one Coca-Cola threw behind Surge when that beverage was first rolled out in 1996 never materialized for Vault, and the drink languished in the shadowy city limits of the carbonated beverage empire for the majority of it existence. The inexplicable introduction of camouflage-patterned cans later in Vault’s run did little to help secure mainstream acceptance.

Anyone who knows me knows I was a bonafide Surge junkie during that sickeningly sweet pop’s heyday. I devoted a large chunk of my time in the early 2000s to researching its demise and keeping tabs on rumors of its resurrection. When I learned of Vault and where was being test-marketed in June of 2005, I drove nine hours non-stop from Florida to the middle of Alabama just so I could get a jump on the rest of humanity. God, what a trip. It was blisteringly hot, and for reasons I can’t recall I drove most of the way with the air conditioning off. I arrived at my hotel streaked from head to toe in the thickest sweat imaginable. Fatigue was arresting my body, but just twenty minutes north of that hotel there allegedly sat a supermarket stocked to the gills with Surge 2.0. So north I drove.

I remember my shrewd decision to buy a Vault from the Coke vending machine just outside the supermarket—which was nestled between some of the most picturesque mountains I’d ever seen—before rushing in and snapping up $50 worth of twelve packs. As I brought that inaugural Vault to my lips, my heart became engulfed in fear. If this tastes like shit, I’ll just have wasted nine hours of my life. Thankfully, Coke didn’t bungle the Surge/Vault recipe, and I felt the most refreshing euphoria of the decade on my taste buds.

The rest of that weekend is very blurry. I remember driving to Plains, Georgia (the hometown of Jimmy Carter) the next day, but I don’t remember why. A plant was purchased, shitty Chinese food was inhaled, locals were teased in a manner I considered playful but they probably construed as threatening. I can also tell you I was wearing a throwback 1986 New York Mets jersey for the majority of this adventure, and I had about a solid pound of styling glue in my hair. The Bush Years were a strange time.

But I digress. I am of course deeply saddened by the discontinuation of Vault, but it comes as no real surprise. Vault saturation levels in convenience stores and supermarkets has definitely fallen off in the last couple of years. You also never see ads on TV for it. That’s just big business. If a plant’s leaves are browning, what are you supposed to do? Cut them off. Vault had a good run. I’ll save the stronger emotions for when my stockpile falls below triple digit fluid ounces.

Thanks, Coke. Thanks for giving Surge another go as Vault. Confucius say third time’s the charm, but I won’t begrudge you if you keep Surge/Vault buried forever post-2011. At least you listened to us for one hot minute.