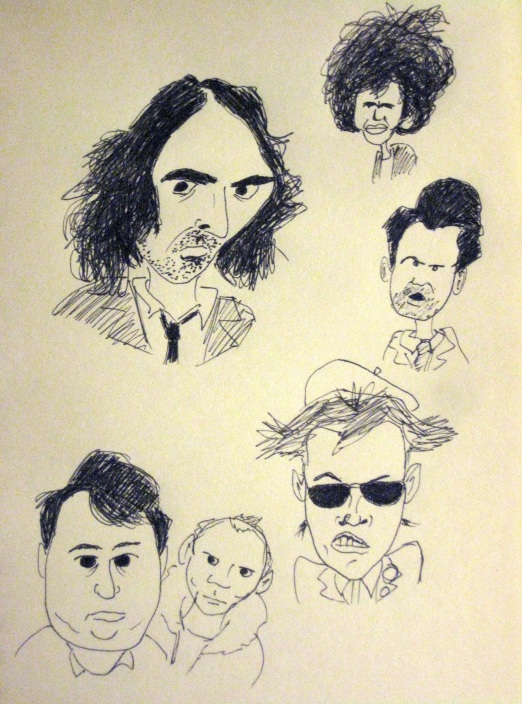 Sometimes late at night you just get that itch to sketch out Russell Brand, and then you wonder, Hey, what other British comedians can I doodle? How about (clockwise from top right) Simon Amstell, Jimmy Carr, Young One Rik Mayall, Robert Webb, and David Mitchell? Don’t think I’ll be submitting these to The Guardian anytime soon, but plenty good for my blog at five in the morning.

“Community”: Joel McHale must feel some resentment that his starring vehicle turned into an ensemble deal. I’ve been watching this show on and off from the start; lately, it’s been cloying, but I might be confusing that sentiment with my gut reaction to “Community’s” army of online fans who scream non-stop into the void about how this show is the most brilliant half hour currently on network TV. Yeah, it’s funny and inventive, but it’s too gooey at the center. I find I also have trouble looking at Donald Glover without hearing his terrible rapping as Childish Gambino echo through my head. Can you imagine if Woody Harrelson put out rap album while he was on “Cheers?” If anybody from this show should be rapping, it’s Ken Jeong.

“Parks & Recreation”: This one’s had so many “will they, won’t they?” plot lines between characters I could shoot myself. I feel like that’s the main thing holding “Parks” back from achieving “Simpsons”-esque greatness. Leslie and Mark, Leslie and Ben, Chris and Ann, April and Andy, Tom and his girlfriend, Tom and his ex-wife, Ron and Tom’s ex-wife, Ron and his three ex-wives…hey, did we ever find out what the heck happened to that vacant lot they were going on about in the first season? Did they actually make it into a park? I don’t remember because the show was too busy throwing all these bullshit romances at us. I had no idea fake Indiana was such a hotbed of unbridled lust.

“Pimp My Ride”: I caught a few reruns of this classic mid-Aughts MTV staple tonight. I can see how Xzibit could get pissed off at all those goofy “Yo Dawg!” Internet memes this show spawned—the guy’s actually pretty sharp off the cuff as he rags on people’s junk rides, and in the end he was just trying to do right by a few cash-strapped teens. It’s unfortunate they never took this show on the road to host mobile “Pimp My Ride” clinics in parking lots across the country. I want to see Xzibit outside a Wal-Mart in Kansas rubbing elbows with the local NRA chapter. Question: Do you think any teen on this show was slightly disappointed in how their ride was pimped? Like, what if they painted your car sea foam green, and that’s your least favorite color? Could you sue Xzibit for making your life even worse?

“Would I Lie To You?”: This is a British game show I’ve been dialing up on YouTube because David Mitchell from “Mitchell/Webb” is a regular team captain. It’s basically two teams of three Brit comedians reading shit off cards and everyone has to guess if what they’ve said is true or false. It’s funny if not a little repetitive, but my real complaint is with the goddamn set. Filmed on a white stage with huge glowing discs of primary colors sitting behind the panels, it looks like a Halls cough drop commercial from the late ’80s. The sterility turns me off. Then again, our American “Jeopardy!” is lit so blue it looks like the broadcast is coming from the inside of a Smurf’s polyp, and “Wheel of Fortune’s” so ramshackle decoration-wise it could be filmed in the lobby of an Omaha Days Inn for all anyone knows. So what the hell, right? Game shows aren’t supposed to be visually stimulating, I guess. It’s all about the white-knuckle competition! Or trying to figure out if David Mitchell’s first word was “Hoover” (it was).

“Halloween Is Grinch Night”: A.k.a. “The OTHER Grinch TV Special.” This aired in October of 1977. Produced not by Chuck Jones but by Dr. Seuss Enterprises and featuring not Boris Karloff as the Grinch (Boris had been dead for like a decade at this point) but Hans Conried, the execution in this animated entry isn’t as lively or memorable as the Christmas Grinch but it’s still plenty enjoyable. Some nerdy little Who has to distract the Grinch from invading Whoville on Halloween night. It’s a fine spooky Samhain snippet, but I almost lost it when they gave the Grinch’s dog an inner monologue by Henry Gibson. I hate it when Illinois Nazis speak for my animated pooches.