Certain elements excite me (crisp look of the establishing shots, everything with Kate McKinnon, the car) and certain elements give me pause (recycling of the library ghost, recycling of Slimer, the ghost punch). Judgment reserved until I exit the theater in July but definitely interested to discover what else this remake / reimagining is cooking up. Ready for busting to commence. 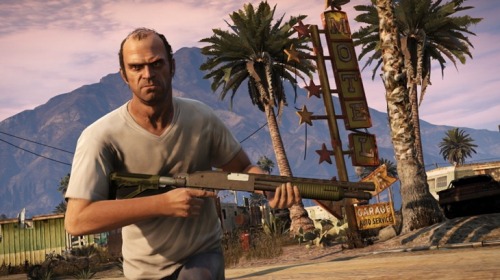 – my roommate acquired a secondhand copy of this game recently and invited me to play it “whenever”; this is a dangerous thing to say to an underemployed freelance writer

– for all of GTA V’s realism and expertly rendered landscapes it’s still just a dumb video game, something outlined clearly when you want your character to jump a fence but it’s too high so his gangly body just slams against it like a fish out of water (another good example: get enough cop cars chasing you and the game becomes The Blues Brothers in terms of police vehicles soaring through the air and recklessly slamming into things)

– GTA V uses the T.S.O.L. song “Abolish Government/Silent Majority” on one radio station, but considering the objectives of the game maybe they should have gone with “Property Is Theft?”

– I’ve never been to L.A. so I can’t speak to the accuracy of the game’s Los Santos facsimile; it seems legit, but at the same time certain portions appear to be modeled after specific blocks or areas in other lesser celebrated cities, which maybe the designers did on purpose re: hometown pride?

– the coolest auto I have grand thefted so far is a lifeguard’s pickup truck, which is the closest GTA V comes to offering an Ectomobile (yes, I know there are codes/mods you can put in to make an Ectomobile, but come on, I’m a thirty-five year old ex-gamer who dipped before Super Nintendo came out, I’m lucky to have figured out what all the XBox buttons do)

– according to this game there are vicious mountain lions waiting just off the California freeway, desperate for their next taste of human flesh; if they ever make GTA Connecticut they’re gonna have to change that to deer ticks

– one thing you definitely cannot do in GTA V is throw it all away to become a dancer; you can go into the strip club but you cannot climb up on the stage to show everyone your stuff a la Magic Mike, which is total fucking bullshit and forces me to give this game a C