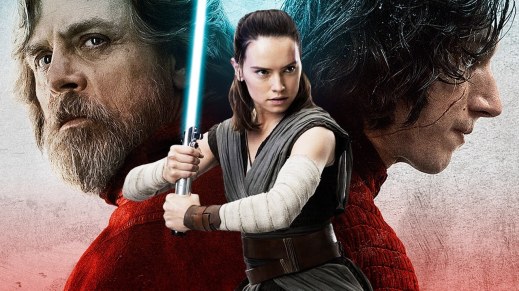 Accepting reality is one of life’s most difficult challenges. Answers elude burning questions, or arrive with baggage you couldn’t expect. The wrong decision feels one hundred percent right; the right decision leaves everyone feeling wrong. These ideas form the core of The Last Jedi, an entry in the Star Wars saga that blurs the good versus evil / black against white mythos that’s been cemented in this entertainment monolith for decades. The results are dream-like, surreal, mostly captivating, occasionally bonkers—yet you witness a growth, not just with the characters but the franchise itself.

The Last Jedi picks up right where 2015’s The Force Awakens left off; Rey (Daisy Ridley) has located the hermit Luke Skywalker, whom she hopes will join the Resistance against the First Order while training her in the ways of the Force. Luke, still reeling from events in his recent past, is wary of this young newcomer and the trouble she may bring to his doorstep. Meanwhile, a power struggle is coming to light within the First Order as Supreme Leader Snoke (Andy Serkis) openly doubts the abilities of Darth Vader’s grandson, Kylo Ren (Adam Driver). Ren is battling his own demons and is not in fact very present in mind for what the First Order believes will be the final push against General Leia Organa (Carrie Fisher) and her Resistance. There’s internal distress on that side, too, as spicy boy pilot Poe Dameron (Oscar Isaac) and ex-stormtrooper Finn (John Boyega) bristle under Resistance leadership and ultimately go rogue.

Ideas that the Star Wars prequels fumbled to infamy are presented here with grace and wonder. There are also moments in The Last Jedi where they roll the space dice and come up with droid eyes. Of course, this echoes the film’s aforementioned themes—you can’t always get what you want, reality can be a bitch. Director Rian Johnson has broken away from the formulaic feel that many believe hampers The Force Awakens; at the same time, Johnson (who also authored the script) deepens the chemistry between the leads, bringing resonance to the fact this war for the galaxy’s heart is extremely personal.

And yes, the rumors are true: this might be the Star Wars with the most jokes. One liners, visual gags, even bits reminiscent of Monty Python. The levity is appreciated as it bridges the gap between emotional set pieces. Don’t forget, The Last Jedi is two hours plus. A little editing may not have hurt, but perhaps that would decrease the perfectly feverish ambience.

FINAL SCORE: Three and a half porgs (out of four). 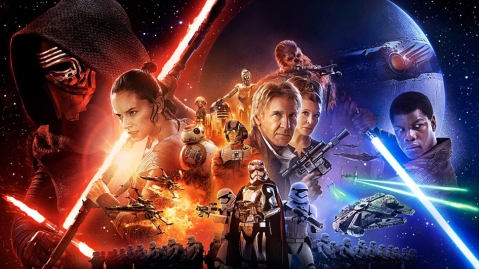 Early marketing for The Force Awakens made it relatively clear J.J. Abrams and the Disney Corp would not be reinventing the wheel for this entry. And why would they? Even the sacred original Star Wars films closely mimic one another. All open in some barren wasteland, all feature dwarfish scavenging weirdos, all allow an otherwise goofy robot to play hero in a clutch moment. And so, seventh verse, same as the first: desert orphan, precocious droid, masked villain with red glowing rod, geometrically opposed spaceships.

It’s not the material, though, it’s the delivery, and Force Awakens delivers, effortlessly weaving visual potency, emotional conviction, unexpected humor, and raw excitement into a crackerjack package that provides antidote to the prequel trilogy’s turgid masturbation. Set thirty years after Return of The Jedi, the film brings us up to speed quickly: Luke Skywalker has disappeared, the Rebels have failed to consolidate their power, the Empire has not remained in defeat. That evil reich, now known as the First Order, counts amongst its ranks a brooding and violent Darth Vader disciple named Kylo Ren (Adam Driver). When a map pointing to the whereabouts of Luke fumbles out into the cosmos, Ren believes it’s his key to restoring Vader’s galactic vision.

Fate (or dumb luck) brings together the heroic team that quickly becomes Kylo Ren’s biggest headache. The AWOL Stormtrooper Finn (John Boyega) and isolated junk trader Rey (Daisy Ridley), both barely out of their teens, are a little overwhelmed as they inadvertently become swept up in the search for Skywalker (a figure neither can believe is real). Lucky for das kinder, another storied figure of lore (Harrison Ford) crashes the party and offers a lending hand (and wookiee). Meanwhile, the First Order turns an entire planet into a makeshift Death Star powered by the sun, and of course our band of outlaws winds up in an assault on that enormous menace, because what, are they not gonna help Princess Leia (Carrie Fisher) and Admiral Ackbar?

Critics dog J.J. Abrams for doing little more than heating up other people’s leftovers in lens flare, but The Force Awakens proves when elements like a supremely talented cast and snappy scripting align the guy can slam dunk. Any bits that seem to defy whatever logic exists in this starry fantasy you forgive because the film’s whizzing you on a spirited, satisfying ride. The wonder and fun have returned to Star Wars, and not a moment too soon.