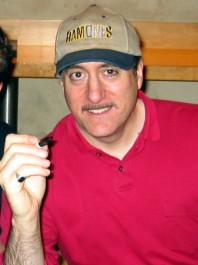 A childhood friendship with drummer Tommy Ramone helped Monte A. Melnick get in at the ground floor with punk rock founders the Ramones. Having previously cycled through his own musical act Thirty Days Out (who squeezed out two albums for Warner Reprise), Melnick already possessed a working knowledge of the professional music business when the Ramones invited him to start running sound for them in the mid­to­late 1970s. This evolved into a two decade stint as the band’s tour manager.

In addition to setting up concert dates with all manner of venues, booking hotel rooms for every tour stop, figuring out a tour budget (including travel expenses and band and crew per diems), arranging for proper transportation, and literally mapping out all travel routes (many of which he drove himself in the Ramones’ famously cramped van), Melnick also had to contend with the unpredictable personalities of his musicians, their roadies, and the expected hiccups that come with being a traveling rock group.

Having authored a fascinating book about his experiences (On The Road With The Ramones) and currently working as the 3D Theater & Audio Visual Supervisor at the New York Hall of Science in Queens, I recently spoke with Monte about the ins and outs of tour managing, some of the larger struggles he faced, and his advice for newcomers to the field.

JAMES GREENE, JR: Musicians often complain about all the down time they have while touring, but that doesn’t sound like something tour managers get to experience. Seems like you’re working from the minute you get up until the minute you’re allowed to go to sleep. Did you ever get to relax or relieve that stress?

MONTE A. MELNICK: The stress was there all the time, yeah, and some times it would get really intense, but then it would pass. It was never too much to handle. And, you know, I feel very lucky that I had what I had with the Ramones. Most tour managers never work with one band that long. They do one or two tours and move on, try to find to another artist to work with. The Ramones liked me, though, so they kept me on all those years. As for down time, in the early days it was very hectic…we’d go from city to city with no real breaks, because that’s how booking agents would set it up. Booking agents are your key to breaking into established venues and markets, so you’re not stuck forever playing crappy place for no money, but back then nobody really knew what to do with the Ramones or where they would go over. So the bookers rushed us all over the place. There wasn’t much down time then, but later on, when the band got bigger, then we could afford to spend a couple days in a city and I’d have time to relax, go check things out.

JG2: Would you always work with the same booking agent, or did you have different people?

MAM: In the beginning it was kind of trial and error, we’d used many different booking agents, but eventually we found Premier Talent, and they were very good with us.

JG2: It’s interesting to hear about stuff like booking agents with the Ramones, because they’re the considered a king punk band, yet they clearly operated outside what is accepted today as punk rock’s d.i.y. aesthetic.

MAM: Yeah, the Ramones started the punk movement, but they were never that kind of band, like the hardcore punk bands that came later. They had a sound and a vision and they wanted it to be on a certain level, that was always the plan. Hence the record companies and the booking agents. The only way they were gonna get big was if they worked with agents and promoters who could get them into the big venues. And once you got in there and if they liked you, they’d want you back…so you’d have some leverage, which is of course where tour riders come in. “We’ll come back if you give us this, this, and this,” y’know? Venues who want bands to come back go out of their way to really treat them and make them feel at home. It was great in the later years when, say, in Norfolk, Virginia they’d want us to come and we could get a club to serve us crab cakes. You could always negotiate your way into some local cuisine. Early on, though, the crappy clubs who didn’t really care about the Ramones, they’d give you Mom’s spaghetti or whatever.

JG2: And the rider is also how you could charge a club for bringing in your own sound equipment and transportation fees, correct?

MAM: Yeah, like I said, when the clubs want you back you can work out all those expenses, because you’re bringing business to their club.

JG2: What were some of the biggest obstacles of the entire Ramones tour managing experience for you?

MAM: Just the changes in the band, you know? Going through eight different Ramones, and all their different personalities. [None of them] liked sleeping on a tour bus, which is what most rock bands do, so in the United States we developed something interesting in terms of tour strategy. We created this system where they’d go off and do little sections of country at a time as opposed to one long tour. They’d fly out to some part of the country, a van would be waiting for them, and they’d drive all over that one part of the country for a bit and fly home. The crew we’d stick on buses because they had to get to the venues ahead of time to load in and set up all the equipment, so it was kind of weird sometimes, pulling into these places with the crew on the big buses and the band pulling up in their little van. And the crew was a whole other group with differing personalities, you had to be aware of that. The next biggest issue probably was getting the equipment stolen, which didn’t happen frequently but happened enough times to really throw things out of whack. You really end up scratching your head when everything disappears. [Going to Guitar Center and] buying everything back, you don’t realize how many cables and picks and stuff you really use. Luckily the record company helped us with the [financial] loss. We never recovered any of that stuff.

JG2: When you started working with the Ramones, did you feel you already had a handle on the job because of your previous musical experiences or was there still a learning curve?

MAM: Well, I mean, nobody knew what the hell the Ramones were supposed to be. And I didn’t really like ’em at first, y’know, I was coming from a band with three part harmonies and all that. But they were still a basic rock band, and they knew what they wanted to accomplish, so in that sense it was easy. It just all kind of evolved.

JG2: Are there any pockets of time you’d want to do over, or do differently? It seems like you ran a pretty tight ship with few major problems.

MAM: [laughs] Are you kidding? There were problems all over the place! They were a crazy band…and there’s plenty of stuff you just can’t prepare for, like what we ran into in Argentina, where unbeknownst to us the Ramones were so popular there were thousands of fans swarming outside the hotel. The Ramones never experienced that before! We had no idea they were that popular down there. We were staying at this hotel with a one way exit that emptied right into the street, and there’s thousands of kids pounding on the van as we’re trying to leave. The band’s yelling at me the whole time, like it’s my fault. It was good, though, because they finally got a taste of the superstar treatment. They deserved that, but it sucked because they couldn’t go anywhere, they couldn’t go out and see stuff in Buenos Aires. Now they’re superstars everywhere. The Ramones the biggest thing now. The first record just went gold a few weeks ago, after thirty­eight years. Go figure. And have you seen that Cadillac commercial? The narrator goes: “Apple, the Wright Brothers, the Ramones…” They’re being lumped in with the Wright Brothers and Apple! It’s crazy!

JG2: Can you explain how you found your way to the NY Hall of Science?

MAM: Well, after the Ramones retired in 1996, I worked for several other [artists], like D Generation and Ronnie Spector. I knew about the Hall of Science because I used to live near by, I was just checking out different stuff I might do, y’know? So I got in touch with them and asked if they were hiring. They said no, but they’re always looking for volunteers. So I started volunteering, doing audio visual stuff, which is always a great way to get your foot in the door, and eventually they hired me. Now I’ve been there 11 years and I really like it. I’m in one place now and I’m not feeling the stress of having to travel all the time. I do still like to travel, though, just not like how the Ramones would tour. Y’know, I’ll fly to California to see my sister, that kind of thing. It’s funny, I racked up all these frequent flyer miles with the Ramones but the last thing I wanna do now is get on another plane! I think that’s how these airlines get away with not having you use you frequent flyer miles if you earned a lot of them.

JG2: Do you have advice for anyone who’d like to start in tour managing?

MAM: Yeah, find a band or a musical act you like, one that you think might go somewhere, and just try to start working with them however you can. You might not start out where you want to be, but you can work your way up and if they’re talented and you work hard you could really go places.