Tobey Maguire: “I Did Steroids.” 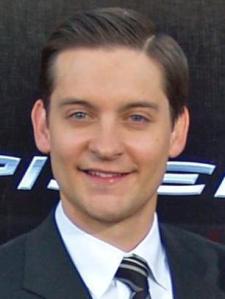 Tobey Maguire has admitted taking steroids in 1998 when he won America’s heart as boy next door David in the Gary Ross film Pleasantville.

“I used steroids during my acting career and I apologize,” Maguire said in his statement. “I remember trying steroids very briefly when I guest-starred as a child on ‘Jake and the Fatman,’ and then when I landed Pleasantville, I used steroids again. I used them on occasion throughout the filming of the Spider-Man films, including that fucking awful third one. I wish I had never touched steroids. It was foolish and it was a mistake. I truly apologize. Looking back, I wish I had never acted during the steroid era.”

Maguire is entering his fifth year as a father to daughter Ruby, and the toddler’s burgeoning interest in protein synthesis within human cells prompted his admission.

“It’s time for me to talk about the past and to confirm what people have suspected,” Magiure said. That echoes the phrase he used repeatedly during a Congressional inquiry into the shittiness of Spider-Man 3 in 2007, when he stonewalled questions about whether the entire cast and crew was under the influence of illicit substances by saying, “I’m not here to talk about the past.”

Maguire then went into seclusion for several months before appearing in the Vietnam farce Tropic Thunder.

“On behalf of the entire Hollywood acting community, I believe Tobey Maguire today did the right thing by telling the truth and openly acknowledging his past mistakes,” said Leonardo DiCaprio, Maguire’s costar in This Boy’s Life. “No one condones what Tobey started doing more than ten years ago, but we love him anyway because he smiles a lot and doesn’t seem like he’d mistreat your daughter on a date to the movies or box social.”

Maguire began his acting career with a role in the 1989 Fred Savage vehicle The Wizard. Before his breakthrough role in Pleasantville, the actor appeared in such fare as The Ice Storm, Empire Records, and Seduced By Madness: The Diane Borchardt Story.

Don Knotts, the deceased character actor who appeared with Maguire in Pleasantville before dying in 2006, told JG2Land from beyond the grave he does not feel duped by his former friend, adding, “It’s not excusable, it’s a mistake but the perception of Tobey when he acts is that he’s a real sweetheart and a cute little ragamuffin and I think that will be restored.”

Knotts said he first found out when Maguire spoke to him via séance Monday morning.

Talk show host Jay Leno said he was “pleased” by McGwire’s admission, adding, “This will probably take the heat off me over this whole Conan O’Brien thing for about five minutes, you know?”

Steroids are not banned in Hollywood at all, but the Mayor of Hollywood began random survey testing of actors in 2008 after Heath Ledger accidentally killed himself while preparing for a future role as surly home run slugger Barry Bonds. The Mayor was supposedly also enraged by Ledger’s death because it meant the script he wrote for 10 MORE Things I Hate About You would never see the light of day.

Maguire’s admission is the latest in a series of drug revelations that have plagued Hollywood in the past 12 months, beginning with a report in Douchebag Illustrated last February that Mark Wahlberg had tested positive for steroids in 2003. In May, it was announced that every cast member on “Ugly Betty” had failed their drug tests and were suspended for 50 episodes. In June, Reese Witherspoon, who played opposite Maguire in Pleasantville, was photographed lifting a Volkswagon over her head in a Target parking lot by the paparazzi, and in July Zac Efron chewed the head off of a small child.