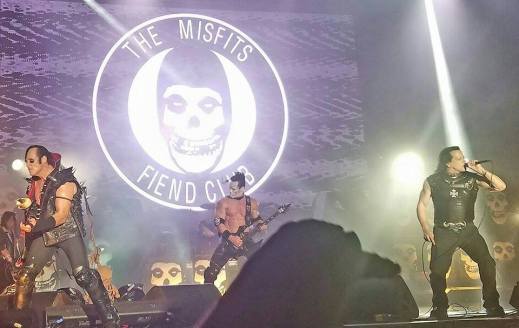 Second verse, same as the first: the Original Misfits got up there in Chicago and played the hits like Famous Monsters never happened. Remember when mere mention of this band would send Glenn Danzig into convulsions? Now he’s done two reunion gigs with them, his mood at both jovial. “I bet a lot of you have kids you take trick or treating,” he opined last night. “Scream your ass off if you take your kids trick or treating!”

I wan’t there. I wasn’t at Denver Riot Fest either. The reasons are myriad. I felt skepticism that any of this would really go down, or that it might veer into disaster if it did. The venue struck me as wrong; the Misfits in their glory days were always a club band, and while I’m happy they can command headlining festival slots in 2016, an engagement at Irving Plaza would have been more spiritually authentic. And, of course, this assembly is not really the original Misfits—it is Most of The Original Misfits Featuring Dave Lombardo. Jerry and Glenn must have had a Batman v Superman moment where they both realized they dislike all the actual Misfits drummers with the same passion.

Call me fussy, call me prissy, call me a freelance hillbilly with a snoot full of honeybees. Denver and Chicago aren’t exactly around the corner. Yes, I feel some regret, but I also wouldn’t be having this discussion if the reunion had been Glenn, Jerry, Doyle, and Arthur Googy at the Whiskey a Go Go. Solace is located in the fact that 2017 is the 40th anniversary of the Misfits’ founding. I’d bet my collection of bird skeletons that something auspicious along these lines will occur to commemorate four haunted decades.

If not, there’s always the YouTube. You know, I never saw the Misfits when Danzig was in the band between 1977 and 1983. I’m keeping a streak alive. 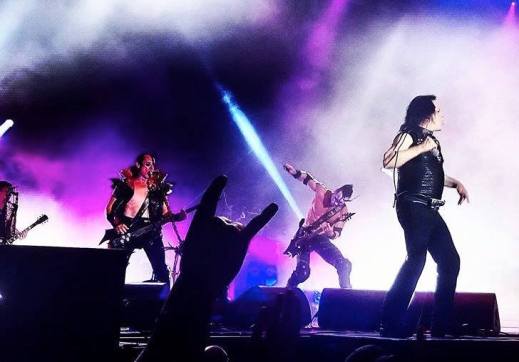 And so it came to pass; Glenn Danzig and Jerry Only met between a pair of twelve foot jack-o-lanterns to belt out an hour’s worth of Misfits songs for the ultra devoted. No fistfights or lawsuits broke out onstage. Everyone seemed to be having fun, including Glenn, who is allergic to most forms of humor. In fact, at certain intervals, it sounded like this ferocious hound of hell was workshopping his standup material—and the crowd was loving it.

Part of me wants to chastise Riot Fest organizers for not offering a high quality live stream of these Misfits, something for which I and many other fiends would have paid a nominal fee. A greater part of me understands that cacophonous cell phone videos are more in keeping with the live recording legacy of this band. Even through pigeon shit fidelity you can tell the ‘Fits performed well, holding perfect tempo and pressing their fervor into the music (Glenn especially). A few clips have moved me emotionally.

The million dollar questions now: will Chicago receive a concert of similar character or will the bloom be off the skull in a couple weeks? Will there be future gigs in other cities? Will there be an album? How will all this affect eBay sales of Graves era merchandise? 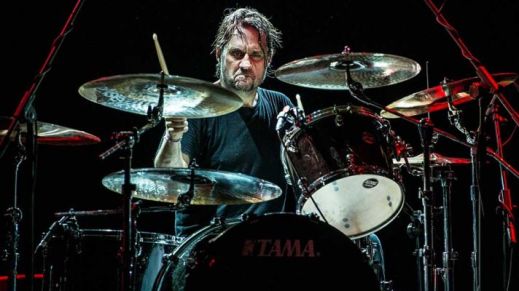 The rumors were true: former Slayer drummer Dave Lombardo is the fourth participant in the Misfits reunion scheduled for Riot Fest 2016 (the first show of which is this weekend), overcoming the major obstacle of having never been a member of the band. Namaste, Dave.

Look, I love Dave Lombardo’s work. He’s a monster, an icon, an innovator. I listen to those Slayer records all the time. I’m intrigued to hear what he’ll do with material from Static Age and Earth A.D. It’s just that the original Original Misfits had five or six different drummers, and they’re all still alive. Glenn and Jerry couldn’t bite the kielbasa and get Googy for these two gigs? Make it a true reunion? There’s no way his fee is higher than Lombardo’s.

I get it. The Original Misfits™ have to consider the fact that this reunion could grow legs. Dave Lombardo has more experience than every Misfits drummer combined (some of whom haven’t even looked at a set of drums since “The Jeffersons” was airing). He’s prepared at any time to do other festivals, or a tour. More importantly, he has no pre-existing issues with Glenn or Jerry. Dave’s not gonna make trouble over some shit that happened in 1981.

Also, remember: this episode is mostly a legal resolution, an agreement between Glenn and Jerry so they stop dragging each other to court over pictures of skulls they stole from somebody else in the first place. So how heartbroken can anyone be? Shouldn’t we just be glad these guys have finally stopped suing each other?

Hire Charo as the drummer for all I care—I’m tired of reading legal documents. They started stacking higher than your records years ago.

When There Is No More Room In Court, The Misfits Will Reunite 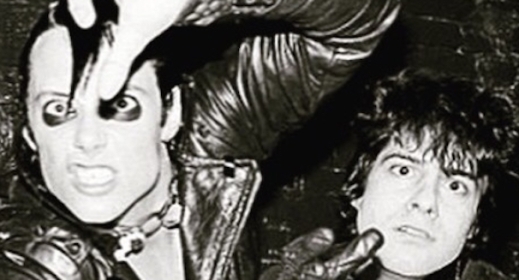 In not very surprising news considering the recent past, founding Misfits Jerry Only and Glenn Danzig have announced they will take the stage with Jerry’s brother Doyle and a drummer to be named later for several performances as “The Original Misfits” at 2016’s Riot Fest. We understand this to mean Glenn and Jerry have finally stopped suing each other over ownership of the Misfit logos and skull faces. Fantastic. I’m excited to see the exclusive merch they plan to roll out for this landmark concert engagement.

Everyone goes back to the well—especially if the well vomits money.

Obviously there is also cynicism in my heart that any of this will actually happen. Riot Fest is four long months away, and these guys have lived in acrimony for a far greater period than they ever spent making music. Will Jerry and Glenn make it to September without another donnybrook or injunction? Maybe if the Original Misfits drummer is one of their lawyers.

It’s like the Mets. I wanna believe, but history and logic tells me otherwise. Stranger things have happened, I suppose. We’ll see come September.

Earlier this month, All singer Scott Reynolds fanned the flames of heavy metal Hell when he appeared at Chicago’s Riot Fest dressed as perennial grump Glenn Danzig. The Glenn Brigade was none too pleased with Scott’s “tribute,” and they’ve been giving the guy grief ever since. So, a couple days ago, Scott uploaded the following musical apology to Danzig, saying he was “being a dick” and that he “knows what it’s like to be picked on.” All fans will appreciate the Descendents joke tucked in there, but will any serious Danzig fans accept this mea culpa from Scotty Fake-zig? 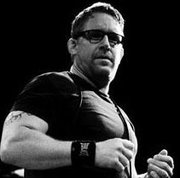 Curiosity got the better of me the other day regarding what All singer Scott Reynolds allegedly wrote on Facebook about playing with Glenn Danzig last week at Chicago’s Riot Fest (the former was said to have labeled the latter an “egomaniacal douche nozzle”), so I messaged Scott via the FB about it. Apparently, Scott wasn’t referencing any specific incident—he’s just bummed, as a long-time Misfits fan, that everything Danzig’s done with his eponymous band has been so serious and muscle-laden and obsessed with sex. Nothing personal, just depression over the D Man’s stylistic departure from the fun of the Misfits. Of course, it should be noted that during All’s Riot Fest set, Scott expressed these frustrations by dressing up as Glenn. LULZ. Something tells me Danzig won’t fire back by getting a JFK haircut and bookworm reading glasses.

Glenn Danzig performed the first in his series of four 2011 “Legacy” concerts Friday night at Chicago’s Riot Fest, headlining the day-long event with a special set of material reaching from present Danzig day all the way back to his storied years with Samhain and the Misfits. Glenn’s strict “no camera” policy couldn’t stop one intrepid fan far in the back row from recording the majority of the performance (beginning from the Samhain chunk of songs). Check it out below.

Sounds pretty good, right? Those period-specific backdrops are sick, too. I just might have to try and weasel my way into the New York “Legacy” gig at Hammerstein later this month. Seriously, I’m a friend of Glenn’s sister, let me in.

Danzig may have put on a great show for his legions of skull-worshipping fans, but rumors are flying around the Internetz this morning about the expected backstage rigmarole. All singer Scott Reynolds hath apparently posted to the Facebook, “Had a great frickin’ weekend…I hung out with some of my favorite human beings in the history of ever! And I gained new respect for Glenn Danzig, because I never knew how much work goes into being such an egomaniacal douche nozzle.”

Hey man, if you spill Danzig’s kitty litter, be prepared to pay the price.

[DANZIG]
Bringer of Death
Not of This World
Mother