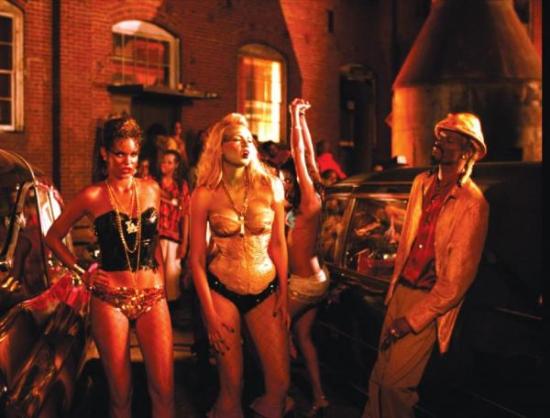 I doubt the girls in Hell are even THAT hot.

Snoop Dogg plays sexy urban Crypt Keeper in this one, sporting braided blonde hair and flanked by comely demon bitches as he narrates three tales of unmitigated/over-the-top ghetto horror. Tale the first finds a poetic rooftop Hell Troll taking sides in a violent graffiti turf war (you WILL see a man’s crotch explode). Hood Horror #2 concerns Ernie Hudson and his band of brothers being imposed upon by an evil money-grubbing southerner who inherits their building under dubious circumstances. Snoop saves the best for last, though, ending his trilogy with the Scrooge-like story of an arrogant rapper who forsakes his less cocksure DJ for fame, money, and statutory rape.

Jason Alexander AND Diamond Dallas Page both pop up in that final entry (which bears the pun-tastic title “Rapsody Askew”), and both are surprisingly upstaged by “MadTV” alum Arie Spears. Spears pulls out a frighteningly accurate and most likely unintentional impression of John Leguizamo’s Clown character from Spawn in the closing minutes of the vignette; it’s as unsettling as it is unexpected, considering up to that point Spears had been playing his character with all the emotional intensity of a ham sandwich. Suddenly, he turns into evil rap Beetlejuice, and everyone loses their shit. I guess I would too if a “MadTV” cast member showed up at my crib and ripped his own ear off.

You want a sloshed Billy Dee Williams? This is your movie. You wanna see gunfire rip apart an unsuspecting chihuahua? This is your movie. You wanna see a forty ounce impale someone’s face like a metal pike? Pony up, son! You’ll also get atrocious-to-mediocre acting, a handful of visually stimulating quasi-Anime cartoon segments, and deliciously awful one-liners like “I need the GPS in my boot to find the chocolate chip you call a dick!”, “Do me Elvis-style!”, and “It’s expensive to be black.” The sum is by no means greater than the individual parts, but as I have implied, some of those parts meet the minimum amazing requirement to push Hood Of Horror above whatever Pauly Shore’s last project was.

Oh, I almost forgot—Jason Alexander attempts a British accent in this movie, and he fumbles harder than the ’78 Raiders. J Bone, do the world a favor and stick to Broadway. We only wanna hear you sing when you’re not Seinfeldin’ it up. Thnx in advance.