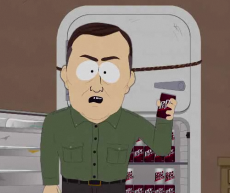 “South Park” ramped up the debate over their rather curious Dr Pepper connection on last night’s season finale by making the soft drink a semi-major plot point. The episode found Kenny and Cartman briefly living in a foster home run by a pair of strict Agnostics. As the father is giving his new children a tour of his home, he declares that they are only allowed to drink “Agnostic beverages.” He then opens the fridge to reveal it packed to the gills with Dr Pepper.

“What flavor is it?” the father opines as he holds up a can. “It is neither root beer nor cola. Nobody is sure what flavor it is, and nobody can be sure.”

The foster parents later get in trouble for providing nothing to drink but the Pep, and it’s eventually revealed they cruelly (and hilariously) punish the insolent members of their brood with gallons of the sticky sweetness. It should be noted that the episode singled out another leisure beverage, Pabst Blue Ribbon, as the cause of any and all domestic disputes between lower class caucasians in rural areas.

So, this would all seem to confirm Dr Pepper’s recent assertion that they have no affiliation with “South Park,” right? Would a Texas-based soft drink giant agree to get into bed with this show if it knew their product would be aligned with Agnostics? Would any soft drink company sign up for this if they knew their product would be used as a torture device on frightened children in a dimly lit basement? Doesn’t seem likely. I guess this was the Parker/Stone way of saying, “We do not have any kind of placement deal, we’re just gloriously fucking with another American institution.”

On the other hand, Dr Pepper got in bed with those rabble rousers Guns n’ Roses a few years ago by trying to give everyone in the country free soda to mark the release of Chinese Democracy. Granted, that turned into a complete wash, but it proves that this beverage brand isn’t above working with profane, subversive, and strange entertainment entities. Again, I declare this investigation ongoing, and the bottom shall be reached hopefully before I expire.

Dr Pepper: We Are Not Affiliated With “South Park”

Dr Pepper’s Consumer Relations Department replied this evening to my inquiry regarding their beverage’s numerous unmistakable cameos on very recent episodes of “South Park,” spelling out in no uncertain terms that their company has nothing to do with the edgy comedy series what gave us talking poo logs and “ass to trout.” Quoteth the Good Doctor:

Thank you for contacting us about Dr Pepper. Your comments and inquiries are appreciated because they provide valuable feedback about our brands.

Please be advised we are not affiliated with South Park.

Our Company has been making great brands that make a splash for more than 100 years. We are proud of our family of products and are committed to providing a wide range of choices for all individuals.

Thank you for taking the time to contact us. We hope that you will continue to purchase and enjoy our products.

Emphasis added. View a screencap of the e-mail here.

So, we assume now that Trey & Matt are either A) paying tribute to their favorite carbonated treat sans backend deal because they just love it that much or B) screwing with us in a not-so-subliminal way because after fifteen seasons they can’t think of any other way to be subversive? I’m not sure those dogs hunt. If you ask me, something is still kinda stank in Denmark.

Thus, the investigation continues. Stay tuned for future dispatches from what is currently my favorite rabbit hole.

I’ve reached out to both Dr Pepper and Comedy Central regarding the “Dr Pep-er” situation, but so far I’ve heard nothing back. Granted, I only e-mailed Comedy Central about five minutes ago, but Dr P’s had since Friday to phone me back with an explanation. Guess they needed the entire weekend to cook up an elaborate cover story for what is clearly a Project Blue Book-style conspiracy.

Stay tuned, pop junkies. This investigation might culminate in an ambush outside the Eugene O’Neill Theater where Trey Parker and Matt Stone’s immensely popular Book of Mormon is playing. I’ll force those rich sons of carpenters to swear on a Bible they aren’t being paid by Dr Pepper (or get punched trying)! 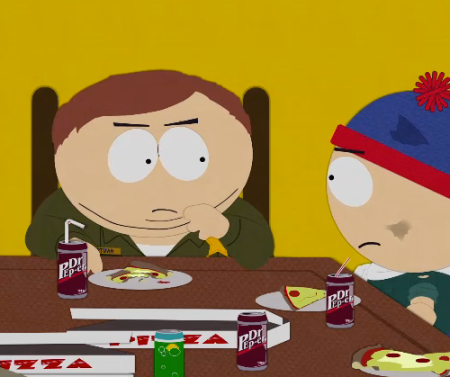 As you can see in this screen cap from last night’s “South Park,” Trey & Matt are still insisting that their cherubic little characters occasionally slurp up some delicious and refreshing Dr Pepper brand soft drinks. Granted, the cans in question are actually labeled “Dr Pep-er” (and they’re not, as I previously believed, just Photoshopped in), but in the immortal words of Jimmy Valmer, cuhm awn. That’s clearly the official Dr Pepper can design, animated with more rich detail than anything else in the shot.

I tweeted @drpepper about this whole “South Park” thing the other day to try and get some solid answers RE: paid product placement. Would you believe they never answered me? Sheesh, it’s like they’re trying to run a multi-national beverage company down there or something. I’ll try calling their customer service hotline tomorrow to see if the phone jockeys have been fed any kind of PR gold regarding the so far unspoken and unholy Dr Pepper/”South Park” union.

Again, what makes this whole thing suspect is the fact that the characters never comment on their “Dr Pep-er” consumption. “South Park” has worked name brands into the show before, but usually as some kind of major plot device (KFC, Wal-Mart). With this Dr Pepper thing, the kids just drink it and that’s that. You’ll notice that the other soda can in the above shot isn’t even labeled—it’s just a green can of soda. Thus, I wouldn’t be surprised to learn Dr Pepper is paying “South Park” to pimp their pop (minus a P, for some reason).

Meanwhile, Cartman never eats his beloved and no-longer-fictional Cheesy Poofs anymore. What up with that? Sigh. I suppose we have to take this one issue at a time.

They Took Our Jobs 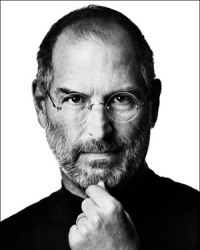 Dear Steve: Thanks for putting my record collection in my pocket and for generally being the Willy Wonka of home computing. You realized the impossible. You made computers objects of social status. You helped to legitimize nerd culture. You also helped to legitimize black turtle necks in a way unseen since Ric Ocasek’s cameo in Hairspray. Please know the world has been collectively muttering one of “South Park’s” most popular quotes in quiet shock since you passed yesterday. Peace out, JG2.

When The Going Gets Weird, The Weird Turn Pro

Hold on to your butts: JG2’s launched a (reasonably) straightforward Twitter account. Allegedly this will A) further my career and B) help me realize my dream of being “retweeted” by a Ice-T. Better start compiling flattering pictures of my ass right now.

In other news, hey, wouldn’t you just love to read a comprehensive biography of legendary punk rockers the Misfits? Well, don’t get your undies all in a bunch, but I’ve been working on one for the past eight months. I don’t really want to get into too much [read: any] detail about this project right now for a number of reasons, but I will say this: if you think you know the full story about this band, you’re wrong. It’s more of a soap opera than your devilocked head could ever imagine.

A bulletin has just been handed to me: it’s two-thirty in the morning and I still haven’t watched the latest episode of “South Park.” That needs to be amended before the sun rises.

I don’t know if this has been discussed at length anywhere else on the InterWEBZ (man, I’m really starting to hate that term), but has anyone else noticed the non-animated cans of Dr Pepper that have been appearing in characters’ hands during the last couple episodes of “South Park?” They’re kind of hard to miss. It was Cartman, I believe, who was nursing a DP at some point during last week’s hilarious “Fishsticks” outing; in this week’s episode, one of the competing Pinewood Derby fathers was clearing holding a can during the big race. I tried to find a screen capture online, but when I typed “Dr Pepper South Park” into Google Image Search, this is all that came up: 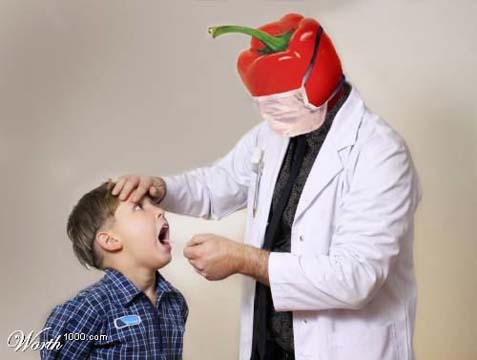 Anyway, isn’t this shameless in-show product placement (a hot trend now with advertisers desperately fighting the Tivo and DVR uprising) the kind of thing “South Park” would usually mock into complete embarrassment? I have noticed recently there are more commercials during your average episode of “South Park” than there used to be. Is Matt & Trey’s greatest creation slipping in the ratings? Are talking Towlie plushies not bringing in their projected revenue? Have the suits beaten the guys who made Orgazmo! into submission? I guess after ten plus years, they have to concede to one or two things their evil corporate overlords come at them about.

Still, you’d think they’d at least make some kind of reference to the silliness of blatantly Photoshopped soda cans. This is the show that just graphically beheaded Carlos Mencia and animated a music video in which Kanye West has sexual intercourse with a giant sea creature. Maybe they thought that stuff would distract everyone from Cartman’s shiny maroon can full of fat, fat greenbacks. Whatever. “South Park” is gonna be appointment TV until it goes off the air. As long as they don’t change the voices or totally run out of steam, I’ll still watch the shiggles out of it.

NOSTALGIA WARNING: Man, I remember when “South Park” first came on. I was a freshman in college. I specifically remember talking about the premiere episode with a girl I liked the day after it aired. That conversation was quite possibly the most 1997 conversation I ever had in my life. Topics included “South Park,” the Star Wars re-releases, Blur, and feeling completely shiftless during the go-go Clinton ’90s. Talk about a scene from the coming-of-age teen comedy I’m going to write when I’m 45 and drowning in the candy-coated memories of my youth. Blecch.