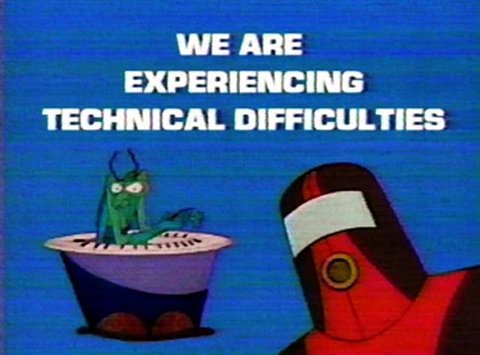 “Space Ghost Coast to Coast” put me in absolute shock the first time I saw it. I couldn’t believe a tv show so fluently spoke to the cultural car crash in my head. A fusion of “Batman ’66” and Letterman and punk rock; a post-modern quasi-cartoon rewriting the rules of kitsch; a reverse Roger Rabbit where our dimension is the tiny portion of a surrealist animated landscape populated by exhausted and agitated characters who couldn’t give a tinker’s dam about what anyone else wants, let alone a human. A show about a retired super hero entering the late night wars with two sidekicks he’s imprisoned in his garish studio on an otherwise barren planet.

No other entertainment makes me laugh as hard as “Space Ghost.” It’s so elastic. Clever and cutting one moment, beautifully stupid and nonsensical the next. Long stretches of nothing, then dense clusters of joke upon joke upon joke, like a swarm of bees. Total reverence for a guest that quickly washes into contempt and sarcastic quips. And the full visual trip of live action celebrities being forced to interact with repurposed ’60s animation—what an addictively weird atmosphere.

An enormous piece of the show’s creative heart was animator and voice actor C. Martin Croker, who passed away last weekend. Croker brought to life the titular host’s enslaved sidekicks, band leader Zorak and producer Moltar, who as the show progresses transform from standoffish super villains into disgruntled everyman employees hilariously nonchalant in their burning hatred for Space Ghost. Zorak and Moltar savor each moment their captor stumbles and find themselves in a quiet pain when he succeeds. Naturally, these two have their own issues: Zorak is a pathological liar and cannibal while Moltar seems to be covering up an unsatisfying marriage.

How could I not be in awe of Croker? He drew this amazing show, voiced incredible foils for the main character, and his name’s stately as hell. This guy’s a legend. Everything I’ve read about him away from his work suggests he was cool, generally willing to share a laugh with admirers or do the Zorak and Moltar voices. It’s devastating that he’s gone at only 54 (cause of death currently undisclosed) but I’ll always be thankful for experiencing his talent. It affected me deeply to see that television as bizarre and lawless as “Space Ghost” could not only exist somewhere but thrive. That’s inspirational.

So thanks, Clay Martin. We’ll miss you.

– following my umpteenth multi-season binge I have to lock “Larry Sanders” in as my second favorite tv program ever; it pulls off the show-within-a-show concept masterfully, presenting top tier Hollywood parody along side deft exploration of humanity’s awkward, painful flashes (Garry Shandling says “Sanders” is really about people searching for love, and he’s right)

– my first favorite tv program ever is “Space Ghost: Coast to Coast,” which takes the “Sanders” concept and swaps humanity for outer space-themed absurdity (elsewhere in my top five: “The Simpsons,” “Duckman”)

– for a program that ran from ’92 until ’98 it’s hard to sniff out any super dated aspects of “Sanders”; that said, it’s trippy to see the episode where they let a pre-“Daily Show” Jon Stewart take over for Larry and he runs everything into the ground, considering he did the exact opposite in real life

– I’m never prepared for that Garry Shandling/Roseanne make-out scene, and I mean that in the best way; you really get caught up in their attraction (similarly, the Mary Lynn Rajskub/Jeffrey Tambor kissing scene that you expect to be weird turns out very sweet)

– so many great little character flourishes pop up once and are never mentioned again, like Artie’s enjoyment of Pod era Breeders and the fact Paula cuts Darlene’s hair

– my brain would collapse into its own black hole if you asked me to name my favorite “Sanders” guest star; David Duchovny’s up there, Roseanne’s up there, Bruno Kirby’s up there, Paul Mooney, the Butthole Surfers, Wu Tang Clan, Kevin Nealon…I can already feel neurons dying

– my favorite line from this series and possibly from television as a whole is when an exasperated Larry tells Artie, “You know, talking to you is like talking to you”; that’s a top three contender for inscription on my headstone