Other Highlights From My Six Months As A Perkins Bus Boy

…In addition to fishing unused jelly packets out of the trash to rinse off and put back on the dining room tables (previously referenced in this post); what a feeling it is to watch an oblivious diner fiddle with a little plastic bin of grape jelly you rescued just fifteen minutes prior from a muggy grave of chewed hash browns and sausage upchuck.

– the other bus boy who exclusively addressed me as “James Bond Jr.”

– my employee evaluation; the only negative bit was “needs to smile more”

– the day I wore Converse to work instead of my regulation grease-proof boots to prove some kind of point (i.e. I won’t CONFORM to YOUR WORLD, oppressors); I slid around on the kitchen floor the entire night

– the Billy Drago-esque manager who raced Kawasaki motorcycles in his spare time and who could never walk out the back door without taking a deep breath, looking up at the clouds, and saying, “What a beautiful day to die!” (he was later fired for sexual harassment)

– being scheduled weekday mornings and having jack shit to bus

– running into the lead manager at a nearby Waffle House several weeks after I quit; she told me I was a great employee and that I could come back any time (this was very nice to hear)

I’ve not set foot in that Perkins or any other since hanging up my bus tub.

In 1999, I started a website called the Cornucopia of Ridiculousness, a small space on the Internet where one more snobby collegiate white guy could share his opinions about music, movies, and the entertainment industry at large. For four long years, Cornuzine (as the name was later shortened to) was my favorite way of wasting time between flunking journalism courses and getting fired from minimum wage jobs.

Despite sophomoric humor, hundreds of grammatical errors, and zero to no readership, Cornuzine managed to land a handful of pretty amazing interview subjects. We’re talking high-profile, well-respected people here, like Digital Underground’s Shock G, Gits drummer Steve Moriarty, Ivan DePrume of White Zombie, and the guy who played Stiles in Teen Wolf Too. Hell, I even managed to snag Harry Shearer, not once but twice. That guy’s on “The Simpsons.” What the hell he was doing talking to me about his facial hair I’ll never know.

But I digress. These interviews are the only part of Cornuzine I’m not completely ashamed of today and, much like parts of my old Myspace blog and the spirit of Fred “Rerun” Berry, I wish to keep them alive. Thus, I am reintroducing “The Cornuzine Interviews” here on JG2Land. Not only will this allow a new generation of web browsers the chance to read a few somewhat insightful conversations with assorted entertainment quasi-legends, it also saves me a considerable amount of time/pain having to come up with any new material for this gargantuan blank space. Hooray!

The first entry in “The Cornuzine Interviews” is a phone chat I had with original Samhain drummer/Son of Sam bassist Steve Zing in 2003. Steve (whose resumé also includes stints in Mourning Noise, Chyna, and the Undead) was beyond nice in this interview, even when I clumsily attempted to force him to reveal how much scratch Danzig throws his way every year. I also appreciated his candor about the Offspring. Son of Sam just released their sophomore record, Into The Night. Check out some hot tracks on their Myspace. Now check out this hot interview…

JAMES GREENE, JR: Do you have a regular daytime job?

SZ: No. I pretty much do music.

JG2: Oh yeah? Are you still doing that band Chyna?

SZ: Well, I have a new band called Doomtree. [Doomtree has since changed their name to Mara’s Drug – ed.]

JG2: How long has that been going on?

SZ: Well…Chyna, I kinda disbanded that and we formed this probably…around September?

JG2: Have you guys made any records or anything?

SZ: We’re actually working on a CD now that should be coming out by early Summer.

JG2: This is kind of a lame question, but is Doomtree in the same vein as the other bands you’ve been in?

SZ: [laughs] Y’know, we never really thought about any of that kinda stuff. It was just…one of those things.

JG2: Do you think, like, having been in Samhain…do you think that’s helped the other bands you’ve been in, or has it been a stumbling block?

JG2: But you don’t think there’s ever been a situation where the people have already judged your bands based on –

SZ: Well, there’s always judgment, always. That’s okay, you know what I mean? You’ll always be judged, whenever you do something. If they judge me, that’s cool. I understand. It can hinder you in some ways, but I think for the most part [the] kids are cool.

JG2: When you guys (Samhain, I mean) would bring out the blood you’d splash around, what was that made of?

SZ: That was stage blood.

SZ: Yeah. Sometimes you have to be careful if you get the mint one, because that’ll burn your eyes really bad. When we did the album cover [for Initium], that was horse blood that Glenn got from, um, a, um, ah, what the hell’s it…a place up in New York State where they, uh…

JG2: Of course. Samhain reunited in 1999. Do you think you guys will reunite again in the future?

SZ: I hope so. We had a blast. Glenn was very happy, London [May, Samhain’s second drummer] and I were very happy…

JG2: That’s good. It seems like a lot of reunion tours are sort of bittersweet because of money or egos or whatever…

SZ: Nah, you know…the ego thing goes so far and that’s it. First off, Glenn is a great guy. A lot of people talk about Glenn in different ways, and you know, [he] has a certain personality, a certain way of doing business, let’s say, and he knows what he wants, and he gets it. If he wasn’t like that, he wouldn’t be Glenn Danzig, and a lot of people get turned off by that.

JG2: Well, you have to be headstrong to get where he got.

SZ: Glenn has been like that since I’ve known him, so it’s not like success changed him. That’s the way he’s been. You know what to expect with Glenn.

JG2: Very motivated, straight-forward about what he wants.

SZ: Yeah. But [the tour] turned out to be great. The Danzig guys treated us great…the whole thing was absolutely marvelous.

JG2: That’s cool. I was reading something the other day where [Samhain bassist] Eerie Von said he wasn’t into the reunion thing. Did you guys ask him, or…what happened with that?

SZ: I don’t really know what happened. It would be kind of hard for me to, uh…it’s kinda like dirty laundry almost, and you know what? It doesn’t really matter at this point. There’s no real answer to it [laughs].

JG2: It was just one of those things where there was a falling out and that was that?

SZ: Yeah, and you know what? That happens. Eerie was together with Glenn for a long time, and you know, me and Eerie, unfortunately we don’t talk, but life’s too short to hold anything against anyone. We live, we learn…you forget. What can you do?

JG2: True. It’s kind of funny…it seems like every time someone asks Glenn what happened with Eerie, the one thing that comes up –

SZ: You know, James? I wish I could answer ya. I don’t know. [this passage refers to remarks Danzig has made in countless interviews that seem to infer Eerie’s love of Southern rock precipitated the end of their friendship. – ed.]

JG2: With Son of Sam, did you know going into that that it was going to be a one-shot thing?

SZ: Oh yeah. Actually, when we set out to do Son of Sam, we thought we were just gonna put out a 45. We didn’t intend on doing anything much, especially with Davey [Havok, Son of Sam’s singer]. It just so happened that London called Davey and said, “Would you like to do this?” It was just one of those things. The timing was right. [Nitro Records] never even heard a demo. They just did it. They signed it and it was pretty successful. Will it ever happen again? I don’t know. Maybe. It was a lot of fun to do. 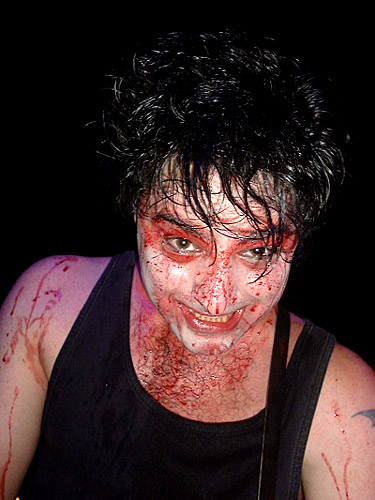 JG2: You did a lot of touring in the 1980s. Was there any band from that era you were really surprised attained fame and fortune?

SZ: You know, there’s bands that unfortunately didn’t get that success, and one of those bands really was the Ramones. And then there’s bands like, um, one time I mixed a show for the Offspring, they played live on the radio, and I said to the deejay, “Man, these guys are pretty bad!”

JG2: But isn’t it Dexter Holland’s label Nitro, the label that got Son of Sam going?

[we both chuckle some more, but are soon interrupted by the sound of young children laughing]

SZ: Girls, you gotta go out, honey. Out, out, please? Out. Sorry, that’s my daughters.

SZ: I have two daughters. They’re like seven and five.

JG2: So you have a family? It’s really hard trying to imagine anyone from Samhain having kids or doing anything normal, like going to the grocery store.

SZ: You gotta see me when I take my kids to see “Barney On Broadway!” That ain’t too fun!

JG2: Good Christ. I can’t imagine…so you have a family and you do music full-time? Is that, like, production work and stuff?

SZ: I do production work, I do recording…it works out.

JG2: Do you get a lot of royalty checks coming in from Samhain?

SZ: They come in. Definitely helps. Glenn’s been good to me. I can’t complain.

JG2: So is Doomtree gonna be touring?

SZ: We’re gonna tour in the Summer. We’re gonna play WFMU on the 27th. You can get that over the Internet, too. It’s gonna be really cool. It’s a really, really cool band.

JG2: Well, when you guys are in Orlando, I’ll have to buy you dinner somewhere or something. I think I can scrape up enough for Waffle House.

JG2: I don’t know. I don’t think anything is wrong with Waffle House. Some hipster guy told me Waffle House wasn’t cool.

SZ: I didn’t know there was something wrong with Waffle House.

JG2: I don’t think there is. I think their banana waffles are great.

SZ: Hey, if you like, that’s all that matters.

SZ: Nobody else’s opinion counts because you have to make yourself happy.

JG2: I’m not gonna let some goddamn motherfucker get in my face about Waffle House!